LATEST:  Prime Minister Tony Abbott has told a press conference in China he is increasingly confident that signals received in the search for MH370 are from the plane's black boxes.

However the Prime Minister made no mention of that fact during a scheduled 1pm press conference in China, and his staff said there was no conference planned for 1.45pm.

Crew on the Ocean Shield deploy a towed pinger locator in an attempt to find the black box. Photo: AP

A spokeswoman for the Joint Agency Coordination Centre, which former Defence chief Angus Houston is heading, said there was no major announcement scheduled.

"There's no further update at this stage," she said. "There's nothing to report."

Geoffrey Thomas, who had thus far been seen as an authoritative source on the search, had earlier told radio station 6PR in Perth:

‘‘At the same time we’ve heard from sources of ours in Sydney that the Prime Minister might be making an announcement ... and the suggestion is they may have triangulated and located the black boxes, but that’s unconfirmed.’’

The Prime Minister's press office said Mr Abbott was due to give a scheduled speech to a luncheon in China at 1.45pm, AEST today.

Beyond comments he made in a press conference just now in China when asked about the MH370 search operation, he had no plans at this stage to provide further updates about the search, a spokeswoman said.

Asked if the reports about the black box being located were true, the spokeswoman said: "I've got no information at all that would be the case."

Mr Houston, the head of the search's Joint Agency Coordination Centre, has previously said authorities believed a number of 'pings' detected by the Australian ship Ocean Shield and and Australia sea patrol aircraft were "from a man-made source".

"The acoustic data will require further analysis overnight but shows potential of being from a man-made source," he said on Thursday night.

The possible detection would be the fifth in the same area since Saturday when a US pinger locator being towed by ADV Ocean Shield twice picked up signals consistent with the frequency of an aircraft black box.

Signals were again detected on Tuesday.

"The acoustic data will require further analysis overnight but shows potential of being from a man-made source," Air Chief Marshal Houston said in a statement late on Thursday.

Air Chief Marshal Houston said the absence of any object confirmation has been "frustrating" for search crews who have been working around the clock to locate debris.

"Unfortunately they detect something in the water, it's then checked by a ship and nothing thus far has been connected to MH370," he told ABC 24 on Thursday. 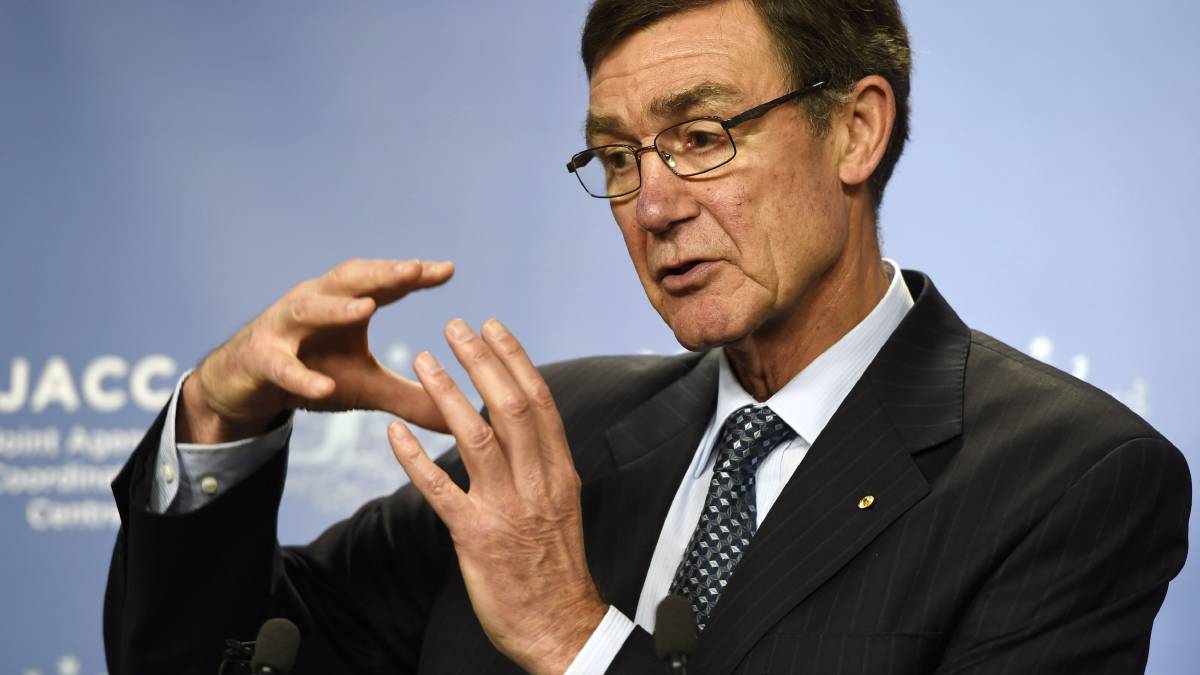 Angus Houston, head of the Australian agency coordinating the search for the missing Malaysia Airlines flight MH370, addresses the media in Perth on Wednesday. Photo: Reuters.

He said it could be up to 20 days before the search moves to the ocean floor.

"I never put a couple of days on it, I think that the transition to the underwater effort will require a number of days before there's any prospect of finding anything," he said.

"It could be up to 20 days, hopefully it will be far less than that, if we get lucky it might be, but on the other hand the conditions down there could be very demanding with all the silt and so on and we may have problems that we haven't anticipated.

"It will be a long, painstaking process and it will be very demanding because it's very deep and very dark down there, and we only have the one vehicle at this stage to do that work at those extreme depths."

A modified RAAF aircraft was this week diverted to ADV Ocean Shield's location to drop buoys around the field in a "sonar buoy pattern", which will involve underwater and floating components transmitting data back to the aircraft.

"That will provide a range of sensors, 1000 feet down, which is 1000 feet closer to the pinger locator on the ocean floor," said Commodore Peter Leavy, the operational head of the underwater search.

The sonar buoys are parachuted out of the aircraft to operate as a "sensor package", he said.

The surface search area has been dramatically reduced, cut by more than half, signalling that authorities may be closer to dropping an underwater robot to the seafloor to visually search for wreckage.

Still an enormous surface area, Thursday's target zone is slightly smaller than the size of Tasmania.

The US black box pinger locator detected a signal consistent with black box frequencies twice on Saturday; and then again it twice detected signals in the same search area, an area consistent with experts' analysis of the last known "handshake" of MH370, on Tuesday.

Acoustic experts at the Australian Joint Acoustic Analysis Centre, based at HMAS Albatross in NSW have since concluded the signals detected on Saturday were likely those of an aircraft flight data recorder; which may have been one of the two black boxes aboard the MH370.

But verification the events are linked to the missing plane would require visual confirmation through an exploration of the seafloor, which Australian authorities are reluctant to begin until they are certain the batteries on the black boxes have expired.

That could be any day now.

It's a race against the clock and the ADV Ocean Shield can detect signals from the sea surface at six times the rate an autonomous underwater vehicle can from the seafloor, Air Chief Marshal Angus Houston said.

Black box transponder batteries have a manufacturer's minimum battery life of 30 days, but those aboard the MH370 were about six years old and due to be replaced when the plane vanished without a trace on March 8 - 34 days ago.

ADV Ocean Shield and the pinger locator were again scouring an area to the northern extremity of an area about 2200 km north west of Perth on Thursday.

As many as 15 aircraft and 13 ships were scheduled to assist in today's search for the missing plane.

Search crews from the air and sea reported a large number of object sightings during Wednesday's search, but only a small number of those items were able to be recovered by ships for examination.

"None of the recovered items were believed to be associated with MH370," JACC said in a statement on Thursday.

Visibility for Thursday's search is expected to be "fair" at about 5000 metres due to moderate south easterly winds and isolated showers.

Speaking from China on Thursday Prime Minister Tony Abbott described the Australian-Asian collaboration in the MH370 search as a "powerful anecdote to the strategic pessimism that sometimes clouds discussions of our region's future".

"The countries of our region can achieve so much more together than apart," he said.

China, Japan, Korea, Malaysia and New Zealand are among many nations who have contributed resources and information to the month-long search off the West Australian coast.

On Wednesday, Air Chief Marshal Houston said the deployment of a Bluefin-21 autonomous underwater vehicle, would be delayed until searchers were confident the transponders' batteries had died and there was no chance of further the limiting the search zone through ping detections.

Malaysian Prime Minister Najib Razak has said after being briefed by Australian authorities he was more optimistic than ever that the signals detected by the ADV Ocean Shield were coming from the MH370's black box transponders, Sky News reported.

But the ocean surface itself may throw up its own challenges, according to authorities and University of Western Australia Oceanographer Professor Charitha Pattiaratchi.

"It's an area that is deep, it's very cold and dark," Professor Pattiaratchi said. "Imagine going inside a refrigerator and closing the door, except it's 450 times the pressure."

The search area falls within a range of sea floor known as the "abyssal plane", which is very flat, not well explored, and covered in "biological material", professor Pattiaratchi said.

Air Chief Marshal Houston has previously said the black boxes could be as deep as 4.5 kilometres below the surface, which is at the extreme end of the Bluefin-21's capabilities. A thick layer of silt on the ocean floor also had the capacity to reduce visibility and mask black box beacon signals, he said.

If the area is found to be the final resting place of MH370, Professor Pattiaratchi said the pieces of plane may have maintained their shape, but other debris could have been dramatically shrunken by the extreme pressure.

A polystyrene cup would likely have been shrunken to the size of a thimble, he said.