Work on the light rail hadn't even begun when Lucy Barnard swapped the roundabouts and 20-minute travel times of Canberra, for the Incan trails and long, deserted walks of South America.

She went in search of adventure, but it was more than just a long-term holiday that took Barnard halfway across the world.

The adventurer has spent the past two-and-a-half years with one goal - to be the first woman to walk the length of the world - from the southern most tip of South America in Argentina to the tip of North America in Barrow, Alaska.

It will could be another three years before Barnard returns - having completed her goal - to see what Canberra has become in her absence.

Her journey is more than 30,000 kilometres long and takes her through 15 countries, mostly on foot. The only time she will be travelling by any other means is when water passes mean kayaking or swimming is the only option.

Every year four people start this arduous walk but to date, only about 10 - all men - have completed it.

To say it's no easy feat is an understatement.

Aside from distance and the journey's physical toll, money, the threat of injury, isolation and fatigue all play a role in trying to get you to quit.

Even before taking that first step, the very thought of those things - and others - raise questions as to why one would even start in the first place.

This question of ''why'' is one Barnard has been answering for friends, family, strangers - anyone wanting to know why she is out in the middle of nowhere alone - since day one.

"I don't even listen to myself now when I go through the explanation because I've done it so much," she says during a Skype call from Peru.

"They're always like 'What are you doing here? Are you on your own? But you're a woman?'. They can't get around that I'm on my own and then I explain to them this is my job.

"I'm a professional - I've been doing this for two-and-a-half years and I've been safe and I'm in this area where you live because it's tranquillo - I don't know what the English word is for that but it's calm and safe: all in one.

"I watch every time - they go from being 'what?' to being really interested and behind me." Lucy Barnard chose Wombat - an Australian cattle dog - because he had a lot of energy and was also protective. Picture: Supplied

It's hard to believe that after all this time hiking through South America - and also knowing that Barnard first decided to embark on this journey while rock climbing in Argentina - that she hasn't always been an adventurous person.

Growing up in Brisbane, Barnard never considered herself to be sporty and even described herself as slightly uncoordinated. It was when she moved to Canberra to study, and begin her working life, that adventure started to take its hold.

"I always wanted to be adventurous," Barnard says.

"It wasn't until ... I, one, had money to do these things and, two, met friends who were already adventurous and could bring me in.

"I really think that has a lot to do with why I was able to have this kind of interest because, without people to encourage you and show you the ropes, it's hard to learn on your own.

"You really need to be a special kind of person to do that, which I wish I was, but I'm not, so I was lucky."

Barnard started this experience to see how far she could go.

She wanted to see if she could achieve something that has only been achieved by a handful of other people. To experience something unlike anything she - and most other people - had ever done before.

Somewhere along though, the way the story became that this adventure was a result of an accident. 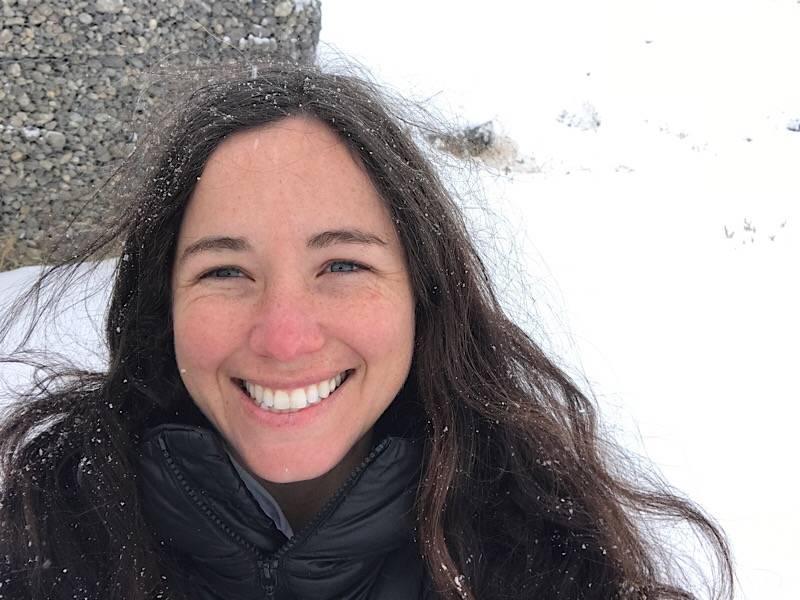 Lucy Barnard found the south of Argentina to be incredibly beautiful but it was bitterly cold. Picture: Supplied

Barnard was hit by a car while riding her bike. She was temporarily paralysed from spinal inflammation and a serious head injury which left her needing to learn how to talk again.

While it is not the reason Barnard decided to walk the length of the world, it certainly raised some hurdles. Hurdles which - with the help of her GP - she was more than willing to overcome for the real reason she wanted to go on this expedition.

As she explains on her blog, Tangles and Tail, she simply wanted "to live adventurously, travel, and have a story to tell".

Heading into the walk, the former communications officer knew she wanted to document as much as she could from her walk.

"I had to really be a bit more bold about what I'm doing because I find generally speaking it is an industry problem and every industry has this issue where women's pursuits are just not as interesting," she says.

"So I'm really working hard because it would be nice to see women represented well and that means taking it into my own hands."

Barnard admits the downside is that what started out as a fun hiking adventure has turned into the most demanding job she's ever had. 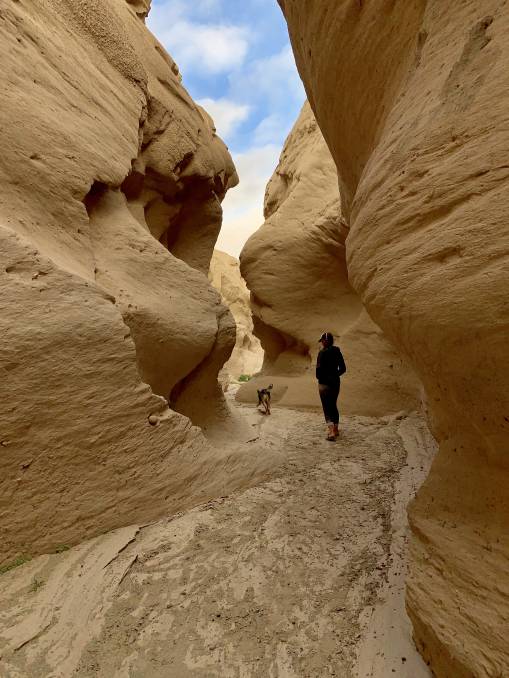 Lucy Barnard and Wombat in a dried up river near Nazca in southern Peru. Picture: Supplied

Between walking 30 kilometres a day, running a blog, scheduling social media posts and organising the logistics for the trek ahead, Barnard has little down time.

But her adventure has, so far, brought her priceless experiences.

The latest is the Incan trail, which she currently finds herself walking along. Fit only for hikers - and cyclists willing to carry their bike - the trail is seemingly untouched by the modern world.

As Barnard crosses these mountain passes that were once used as a trading route and are filled with the occasional set of handmade stone stairs, she can't help but wonder how anyone ever led a donkey through the trail.

But there is a flip-side to everything. With every memorable experience comes a challenge.

The adventurer found the south of Argentina to be incredibly beautiful but it was bitterly cold and at times dangerous.

The Atacama Desert in Chile - while visually amazing - was both a difficult and at times a horrible experience.

And then there's simply needing to survive on a diet of rice and oats while on the road.

I'm really working hard because it would be nice to see women represented well and that means taking it into my own hands.

But it's interesting - the things which Barnard believes to be potential threats to her goal are not what one would expect. For one, she is not concerned about the fact she's a woman travelling alone - aside from her dog Wombat.

Barnard takes precautions, of course - she carries pepper spray wherever she goes; she wears a fake wedding ring to accompany a story about her ''husband'' being in the next town along; and when she was looking for a dog to accompany her on her walk, she chose an Australian cattle dog because not only do they have the energy to walk long distances, they are known to be protective.

Barnard also carries a beacon which connects to an international emergency team in case of serious injury, and ahead of the trip she discussed with her GP in Canberra things such as different vaccines and contraception.

"This is an ugly topic but in the event that I'm raped I really don't want to worry about being pregnant," she says.

Despite all of this, the one thing Barnard finds to be her biggest threat is the fatigue.

Visa restrictions means the adventurer has just 170 days to get through Peru.

The trek itself is made harder because the Incan trail Barnard has chosen to walk travels through the mountains. It takes longer and requires more energy than walking through the coastal towns, but the lack of people means it's also safer. 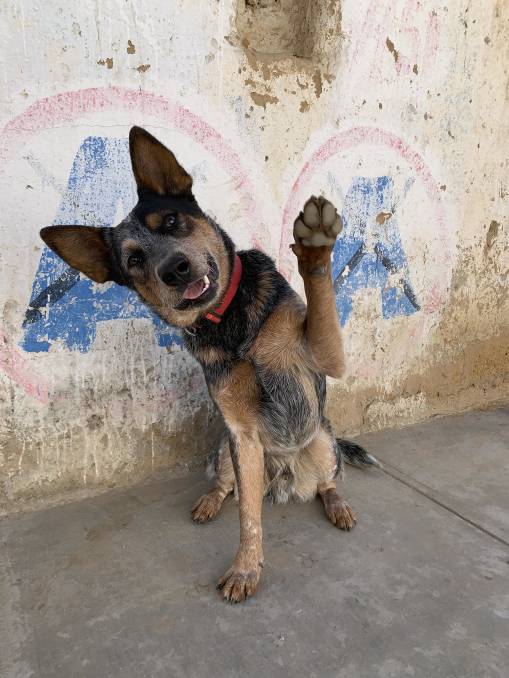 In the coming months (and if everything goes to plan), Barnard needs to walk at least 30km through mountainous terrain every day, for 10 days, before she is able to take three days off to recuperate. If she doesn't meet this goal before her time limit is up, she will be breaking the law.

"People do overstay their visas and they pay a fine and it's not so terrible, but with a public profile, I can't afford to do that and I certainly don't want to encourage people to ignore the laws of countries - that's just against what I stand for," she says.

"I want to do things properly which means I'm exhausted and among all of that, I'm on my own so every day I have stresses.

"When I sleep, I only really half-sleep because I'm listening out for if someone is in my tent. When I get into town, I don't really speak Spanish and I haven't been able to learn because I haven't had time to do that - to see people and practice regularly - because I'm always working.

"And it's great - I love it but you know how you see how bloggers write about how fantastic their life is and that you can earn lots of money? That is a lie. You don't want my job."

So what keeps her going when she hits that metaphorical wall?

Partly, it's the community that has formed around Barnard.

The people who follow her blog or social media accounts; those who have let her couch-surf for a few days in different South American towns; people who have spent time walking part of the way with Barnard; companies and organisations that have sponsored her; and those who donate everything from audiobooks to shoes through her website. (The latter, of course, is something which gets a fair beating along the way and Barnard has already gone through seven pairs).

But, almost unexpectedly, it's Barnard's attitude towards quitting and definition of failure which are probably her biggest assets.

Despite her desire to make history and even though her goal is within the public eye, at the end of the day this entire adventure comes down to the fact that she chooses to be there.

"For me, a really important part of my general wellbeing - consistently across my life - has been to understand that quitting is always an option and it's not a failure," she says.

"I think quitting is really an asset and it's one of your best draw cards. I don't know why people have such a big problem with quitting - I really don't.

"If you're unhappy then you should move on and find something that makes you happy - you only have one life, depending on what you believe.

"You have a responsibility to make sure that you make the most of it so if you're being miserable and not moving on from something then you're really you're own culprit."