The first time I went to see Clyde Mansell, the former chairman of the Tasmanian Aboriginal Land Council, I wanted to do a story about traditional knowledge. He politely refused to tell me anything. "You have to be on country to understand," he said.

Instead, I was invited to join the wukalina walk.

The walk is Mansell's dream realised: an ambitious idea brought to life over 15 years. It achieves two purposes: sharing knowledge and culture with tourists, and employing Aboriginal guides to work in their community's spiritual heartland.

I join a group of seven plus two guides: Jacob Holbrook and Justin Stonehouse. Departing by minibus from Launceston, we will spend the next four days in the wild coastal country around the Bay of Fires. We will sleep in a beautiful, specially-built timber lodge overlooking a secluded beach, and a lighthouse keeper's cottage built by convicts. And we will participate together in an experience utterly unique in the world. Within hours of setting foot on the track, I can see where Mansell is coming from.

Our guides are in their element on country. They stop to point out this or that plant, dart off-track to suddenly seize a lizard, and identify circles in the sand as Tasmanian Devil footprints. Facts are felt rather than seen or heard, settling into our bodies along with blisters and tan lines.

It is one thing to read on an interpretive panel that there is a native plant that acts like soap. It is quite another to have Holbrook pluck a perfectly typical-looking seed pod out of the bush, rub it vigorously, and see it bubble up and drip down his hands like he was standing at a washbasin.

It is one thing to sit in a classroom and hear that Aboriginal people used to make canoes out of bark. To walk obliviously past a shedding myrtle before Stonehouse stops us, picks up a piece, and demonstrates its recommendable properties right there in front of us, is entirely different. 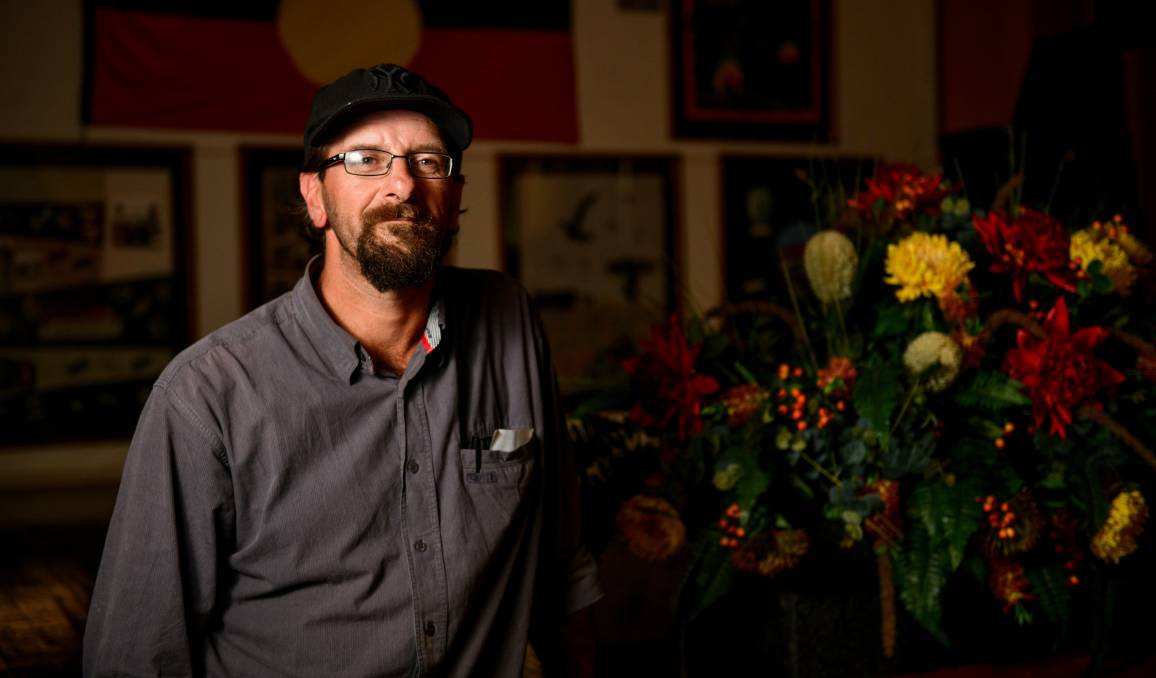 Justin Stonehouse at the walk's starting and finishing point, the Aboriginal Elders Council of Tasmania in Launceston.

And then there is the chasm in worldview. "We don't own the land, the land owns us," Stonehouse says. "That's something a lot of us learn growing up."

"I would have loved to have been here back when this was our country," he adds. "Living on the land, completely cut off from the rest of the world." We are walking through thickety coastal scrub, and he gestures to the plodding line of walkers in front of us. "Imagine that we were a clan," he says, "the seven of us. And we were walking from one spot to another - for whatever reason. The season changing, or better hunting."

"And all we had to do was go as far as we wanted to that day, and find enough food to eat. That's it. No nine-to-five. No schedule." The sky is extraordinarily blue and we can hear the lulling rhythm of the ocean behind the grass trees. I can see his point.

When we arrive at our first overnight stop, walk general manager Gill Parssey and Elder Audrey Frost are already there. They aren't supposed to be, but you see, a salad has been left out. So they drove over two hours from Launceston, got into a boat, rowed across the river, and walked the remainder of the journey to ensure the salad arrived before we did.

Since she is there, we ask Aunty Audrey about her life.

She was born, like many Tasmanian Aboriginals of her generation, on Cape Barren Island. She says she can remember every piece of her childhood like it was yesterday: the mutton-birding, the water, her father's long trips harvesting yacca gums.

When she was eight Audrey's family moved away from the Aboriginal community to Launceston. She went to a public school. There she was told, as per the curriculum, that the entire race of Tasmanian Aboriginals had died out - with Truganini, in 1876.

"Then what are we?" eight-year-old Audrey thought to herself.

Sixty-three years later, this walk is the distilled, packaged, and proudly displayed essence of what they are.

krakani lumi - the first accommodation spot - is a case in point. Designed by Tasmanian architects Taylor and Hinds, the award-winning lodge and sleeping shelters are a luxurious, modern re-imagining of the domed structures inside which Aboriginal people used to live. It's our home for the first and second nights of the tour, with a gentle day in between the walking to relax, swim, and learn about cultural activities like spear throwing. One of the sleeping shelters at krakani lumi.

It's also on the second day that we are led up and behind a sand dune to an Aboriginal midden. This is a gathering place, where family groups over millennia would congregate. They would leave behind the shells and bones of what they had eaten, as an indication to others of food what was available in the area. These fragmented and hardened layers of discarded calcium, solidified over time into charcoal, are the only indications today of these history-steeped places.

Make of this what you will, but standing in the charcoal-swept, natural amphitheatre of the midden, is the first time in my life I have felt the presence of people who are no longer alive. You could half-see them: women and men and children. Ambling into the scene: picking at mussels, or watching the fire. The layers of the past felt semi-visible, both there and not there, and I felt with some alarm that my insides had coagulated. It was a deeply weird, mystical sensation, neither pleasant nor unpleasant, and I felt both relieved and disappointed when we moved on.

At night, dinner is oysters, mussels cooked in a tomato sauce, white fish, mutton bird, campfire-baked bread and several types of salad, accompanied by Tasmanian wine. And along with the meal, the most significant parts of the tour happen around the dinner table. The valuable thing about having all-Aboriginal guides, on a walk where presumably-good intentioned people have paid to learn about culture, is that frank conversations can happen without fear of looking stupid or offensive. Members of our group ask questions like, why are Tasmanian Aboriginals fairer-skinned than some on the mainland? And, what exactly is meant by "men's business"? On the guides' part, they seem to have an unfeigned desire to disseminate accurate knowledge about their people. A tour member reads in front of the fire at krakani lumi.

The third day is the longest. Seventeen kilometres along the beach to larapuna, or the Bay of Fires. It helps that this stretch of coast is almost rudely beautiful, frequently lauded in lists of the world's best beaches. One of our group is a landscape architect, and he says that when he's in these parts of Tasmania he just throws up his hands and admits defeat: the natural placements of orange-licked rock, silky white sand, and sparkling ocean can simply not be improved upon. The unfolding series of sheltered bays feel like a gift, custom-made, just for us - even though they have evolved this way, indifferent, over eons.

On the last day, it is very difficult to leave. But we reluctantly haul ourselves back onto the minibus, settle into our seats, and drive back to Launceston and to our regular lives.

Back at his office, I asked Clyde Mansell again why Aboriginal knowledge had to be shared on country. 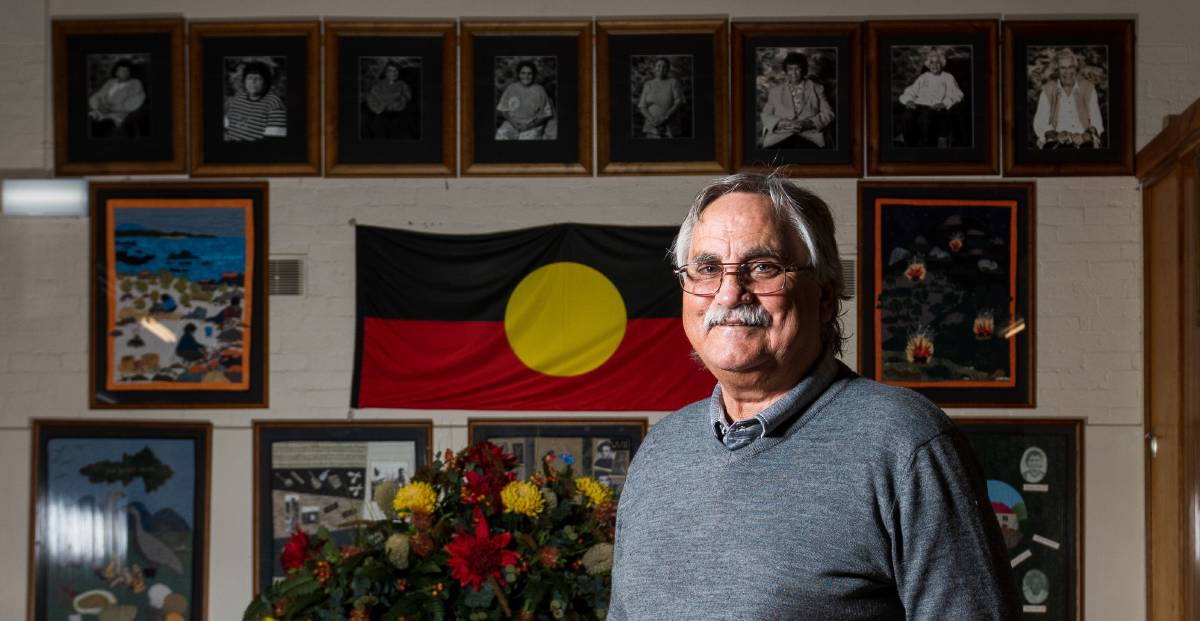 Clyde Mansell is the founder of the wukalina walk.

"It's about telling our story the way we want it told," he said.

"What made me think like this is that ... I've always said to non-Aboriginal people, if you want to see the Aboriginal community at its best, see them when they're mutton-birding. When they're in control of their destinies, even for a short period. This walk is a progression of that.

"We're using the environment to tell our story."