Surf Life Saving WA's South West based Westpac Helicopter reported more than 65 per cent increase in swimmers and surfers being cleared from the water due to the presence of sharks during the school holidays.

The service, which operates between September and April each year, cleared more than 95 surfers and swimmers from South West beaches, as well as warning more than 300 beachgoers not to enter the water due to the presence of sharks.

According to their data, 50 sharks were sighted from Bunbury to Hamelin Bay with 21 of those sightings requiring action to warn beachgoers. A 39 per cent increase on sightings from last year.

SharkAerials founder Blair Ranford said many variables could have played a role in the higher number of shark sightings in the southwest.

Mr Ranford said the weather, flying hours, visibility, a smaller swell, whale carcasses and an active seal colony could all have been variables for increased sightings.

"What they are seeing is a very quick snapshot and it is also very weather dependent," he said.

"All through the southwest 99 per cent of sharks that they see and clear the beaches for are bronze whalers they are not great whites.

"Bronze whalers are a big shark and could potentially be dangerous but they are not the ones we have the issue with down here.

"I see them every single day I fly my drone they are as common as houses and the majority of the time they actively go out of their way to avoid people.

"The other part is that historically in this region white shark numbers or sightings peak from late winter until the end of Spring, so this is the time of year you would expect white sharks to be seen." 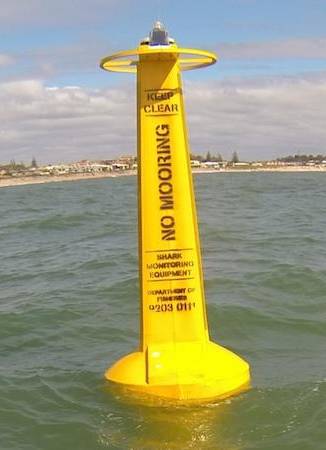 Last week the state government installed two new Shark Monitoring Network Receivers at Bunker Bay which sends out an alert if a tagged shark is in the vicinity of a receiver.

Related content: Surfer bitten at Bunker Bay and lives to tell the tale

Mr Ranford said there was a seasonal seal colony around the corner from Bunker Bay with around 10 or 15 seals in summer and up to 300 seals during August, September and early October.

"I go to Bunker Bay to film early in the morning often, at sunrise it is not unusual to see 10 to 20 seals going through the surf breaks on the way back to their colony," he said.

"If you are going to surf there you need to realise you are in the transit zone to a seal colony and the sharks are looking for the seals.

"Ignorance is not an excuse anymore you really need to be aware and act accordingly."

Mr Ranford said people needed to be smarter and use the tools that were available before they decided where to surf or swim, and recommended using a shark shield which could reduce bite incidents by 60 per cent.

"People need to keep up to date with the app in case a shark has been seen at your beach, otherwise how would you know if someone reported a four metre great white at Injidup," he said.

"You might paddle out when you could have otherwise known it was there and chosen another spot.

"A lot of people need to change their attitude to the fact that the ocean is healthier than it has been for a long time and you need to be respectful of that and understand it."

Mr Ranford said while the technology being used for shark mitigation was helpful it would never be the be-all-and-end-all because you could never tag all sharks or have receivers on every single beach.

"It is better to have it than not have it, especially at high risk spots like Bunker Bay," he said.

"The beach in Esperance where unfortunately the man was killed, did have a receiver but it was not a tagged shark so it did not help.

"The only way we can do things long term is to learn more about them anyway and that means tags and finding out where they are going and why.

"I am supportive of it but at the end of the day people need to change their mindset.

"So many people grew up surfing in the 70's and 80's when there was no whales, no salmon, snapper and shark numbers were down.

"They got very used to surfing in an ocean that was really depleted.

"Now we have 40,000 humpbacks, big schools of salmon migrating again, the snapper are good and in turn the sharks have increased because they increase inline with prey availability.

"There are never too many sharks given the food available that is not how they work, there are just as many as they can survive on."

Fisheries Minister Peter Tinley said the City of Busselton has agreed to operate the new shark warning system tower at Bunker Bay, which can be activated to alert water users when a tagged shark is detected or if there is a reported shark sighting in the area.

Vasse MLA said the figures reported by the SLSWA were in line with feedback she received from ocean users, which is that they have seen a significant increase in white shark activity along our coastline.

"This together with the fact we have increasing numbers of whales and seals means this public safety issue is a growing concern," she said.

"Efforts must continue to explore technology to address this issue, with a strong commitment to intercepting the increasing number of whale carcasses when they approach to our coastline, as well as a commitment to imminent threat policy for when sharks attack."

Earlier this year, the WA Government announced a 12-month extension of its Smart Drumline trial off the coast of Gracetown, at a total cost of $6.4 million to conduct the trail.

"Western Australians by-and-large understand the risks that come when we interact with our environment, though this, of course, cannot compensate for when fatal incidents occur," she said.

"The likelihood is that there will always be risk associated with interacting with the ocean and a fear response to these dangers is not uncommon.

"However, I will continue to urge the Government to invest in rational, effective responses that will increase safety for the surfing community.

"Instead of spending millions of dollars on ineffective research exercises, such as a drumline trial with a two per cent success-rate, the Government should be doing it all it can to ensure an accessible supply of scientifically effective deterrents to surfers.

"Currently a $200-dollar rebate scheme only applies to two specific products, when there is more technology available to be developed and harnessed.

"This includes the development of static ocean deterrents, such as those emitting low-frequency electrical pulses, or magnetic and visual stimuli to deter sharks without any harm to marine life.

"Such measures would not eliminate all marine danger, but would at least ensure that recreational lovers of our oceans will be equipped with some method of non-lethal defence."

This story Why has there been an increase in shark sightings? first appeared on Busselton-Dunsborough Mail.