What is Australia's national dish? Some would argue the chicken parmi, the ubiquitous schnitzel found on many a pub menu, might go close? Others would argue Pavlova (ignoring the arguments with New Zealand). Perhaps prawns on the barbecue, a roast leg of lamb, some cheesy scrolls filled with Vegemite or a simple meat pie? Would you ever consider a dagwood dog, or a chocolate crackle (did you know Copha is unique to Australia?) or a delicious dip made with nothing but a tub of sour cream and some packets of French onion soup?

Ross Dobson wasn't trying to narrow it down to one dish when he was given the task of compiling recipes for Australia: The Cookbook.

"But it certainly sparked plenty of conversations about what recipes should be included," says the chef and author.

"Speaking to editors, and even family and friends, we all had dishes that spoke to our memories of Australia."

While his brief was the past 200 years of Australian food, there's a discussion of the contribution of our First Peoples. There's a section in the introduction from Ularai Barkandji woman Jody Orcher, director of Wariku Bushfood Infusions, who looks at native cuisines both past and present, and she outlines some popular bush foods and how they are used. Several of the recipes include these ingredients.

Dobson looks at how subsequent immigration shaped our cuisine, from British settlement, to the waves of Chinese coming to work in the goldfields, to those leaving Europe after the Second World War. He touches on the influences of our geographical location, our closeness to Asia and the Pacific, and how even our climate and terrain, our industries of agriculture and viticulture have shaped what we eat.

"Putting aside the politics of it all, this book is really about what we eat," Dobson says. 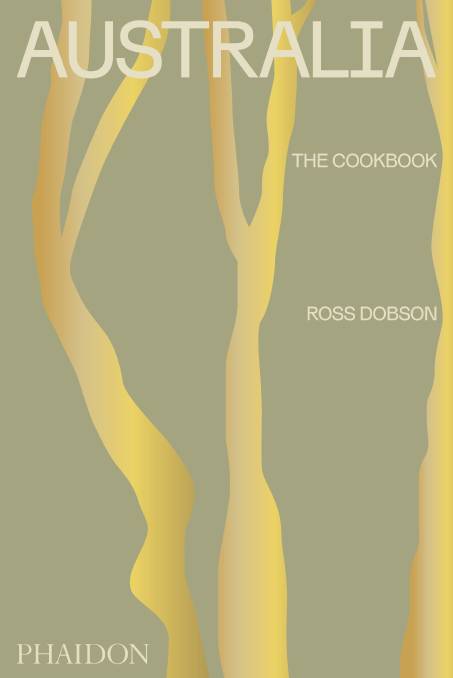 "It was fascinating learning about how we've taken certain dishes from somewhere else and made them our own.

"Think of the Chinese restaurants in every country town in Australia, things like Mongolian lamb or honey prawns, or how we've taken Thai or Vietnamese food and made it our own."

His research took him to many places, including the Trove archive of the National Library of Australia. One of the more interesting, and earliest, recipes he found was for "colonial goose".

"Goose was a popular item on the English Christmas table and it wasn't readily available here, so lamb became a substitute for goose," he says.

"This was in vogue in Australia and New Zealand around the turn of the 20th century, and it kind of makes sense. Goose could not be found and mutton was readily available. The stuffing is typical of what would be used to stuff a goose at Christmas time in England. If offal isn't your thing, you can always leave out the kidney, but there's barely any in there, so you may not even notice it. It does, however, add an earthy flavour that is complemented by the sage.

"We actually made this for the photoshoot and it was delicious."

Phaidon never does cookbooks by halves - it's the publisher of such tomes as The Silver Spoon, The Origins of Cooking and The Family Meal: Home cooking with Ferran Adria - and Australia: The Cookbook deserves a place on every bookshelf. It's 432 pages, and there are 350 recipes, pages of gorgeous landscape photographs from our rainforests, to our deserts, to our rivers and oceans. It's a beautiful book.

But it also deserves a spot on the kitchen bench, because on every page is a recipe that will make your tummy rumble with the spark of a memory.

I've been wondering where to find a white Christmas recipe to rival my late grandmother's, and here it is. A definitive scone recipe? How about Flo Bjelke-Petersen's pumpkin scones. Or biscuits with commercial names we're avoiding, such as custard kisses, iced jumbles, iced biscuits (with pink marshmallows, jam and coconut), you know the ones we mean.There are also childhood favourites such as chicken and sweetcorn soup, fish cakes, rabbit stew, a corned beef dinner, even crumbed brains.

Australia: The Cookbook is a look back at what has shaped Australian cuisine, even shaped our nation. But it's also a journey back through those meals that have shaped our own lives. Australians on the whole are reluctant to eat kangaroo. Some do, most don't ... It is still hunted and cooked using traditional means by Australian First Peoples. According to the Australian Bureau of Statistics, and at the time of this book's publication, 30 per cent of Australians were not born in Australia. This adds to the complexity in answering the simple question: "Why don't more Australians eat kangaroo?". Of all native animal meat, kangaroo would be the most popular and accessible. Other native species such as wallaby, emu, crocodile or magpie goose may appear, but on niche restaurant menus. The thing is, the kangaroo is part of our collective psyche. Indigenous and non-Indigenous alike. Aboriginal people have a diversity of views about kangaroo killing and the animal has myriad cultural, social and spiritual significances to the First Peoples. And First Peoples' cultural practices govern sustainable consumption so that no species is ever over-hunted and its cultural significance is respected. The animal, along with the emu, is on the Australia coat of arms; it is on the dollar coin; and a much-loved children's television show had as its star a kangaroo named Skippy. Need I say more? Kangaroo is a very lean meat. Not only is it high in protein and low in saturated fats, but it tastes really good (it's the perfect meat to throw on the barbecue) and is sold in just about any supermarket. I think that kangaroo meat is better than beef in this salad (beef is the meat that is typically used).

1. To make the dressing, put all the ingredients into a small bowl and stir until the sugar has dissolved, then set aside.

2. Put the kangaroo into a bowl with the fish sauce and sesame oil and toss the meat around until it is coated all over in the marinade. Leave to marinate for up to one hour, or cover with cling film and refrigerate for up to six hours. If refrigerating, remove from the fridge 30 minutes before cooking.

3. Preheat the barbecue hotplate or a griddle pan to high. There is no need to oil the plate as the sesame oil in the marinade prevents the meat sticking. Cook the kangaroo for three minutes on each side. Remove to a plate and leave to rest for 10 minutes, then finely slice the meat across the grain.

4. Place the meat in a large bowl and add the cucumbers, red onion, mint, chilli, papaya and tomatoes. Tumble the mixture onto a large serving plate. Pour over the dressing and sprinkle over the peanuts.

5. Serve with the lime halves on the side to squeeze over. I'm not a gambling man, but if I were, I would bet that if you randomly chose a pub in Australia, you would find chicken parmi - also called "chicken parma" - on the menu.

2 large skinless and boneless chicken breast fillets, about 200g each

1. Preheat the oven to 180C. Line a roasting pan with baking paper.

2. Put the chicken breast fillets onto a clean chopping board. With the palm of one hand on the chicken, carefully cut through the centre of the fillet, horizontally, to give two pieces. Repeat with the second chicken fillet. Put the four pieces of chicken between two sheets of cling film in one layer. Use a meat mallet or rolling pin to pound the chicken so it is an even thickness, ideally no thicker than 5mm, then transfer to a plate.

3. Put the flour onto a plate, beat the eggs in a bowl and put the breadcrumbs on another plate. Toss the chicken in the flour, then dip in the beaten egg, and finally press into the breadcrumbs until coated all over. Return to the plate and set aside.

4. Heat the oil and butter in a large frying pan or skillet over a medium heat. When the butteris melted and sizzling, add two chicken breasts and cook for five minutes on each side until golden. Adjust the heat if the breadcrumbs are cooking too quickly. Transfer to the prepared roasting pan and repeat to cook the remaining chicken, adding it to the pan.

5. Pour the tomato passata over the top of each chicken breast, add the mozzarella, Parmesan and a sprinkle of oregano, then bake in the oven for 30 minutes, or until golden. Scatter over the parsley and chilli flakes, if using, and serve hot. 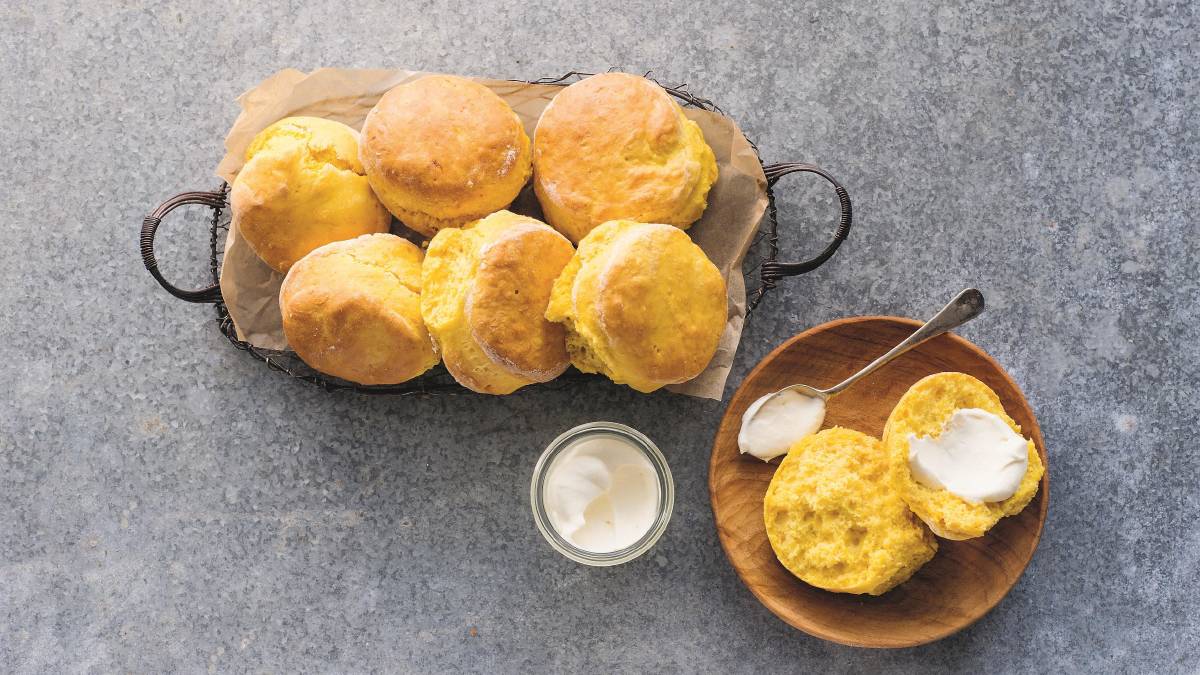 With some minor amendments a recipe really can become a national icon. This is one such recipe and much credit goes to former Queensland Premier's wife, Flo Bjelke-Petersen. Flo drew attention to the pumpkin scone in the 1980s but they were not hers alone. The earliest published recipe for pumpkin scones that I could find was from 1918 in a newspaper with a tongue twister of a name: The Cumberland Argus and Fruitgrowers' Advocate. It seems little changes in the world of the pumpkin scone. A recipe from 1918 is the same as a recipe today.

3. Put the pumpkin, butter and sugar into a small saucepan and heat over a low heat and stir for just a minute or two until the butter has melted and is well combined with the pumpkin. Transfer to a heatproof bowl and leave to cool.

4. Add the egg, milk, flour, baking powder and salt to the cooled pumpkin mixture and stir with a fork until the mixture just starts to come together to make a wet dough. Tip the dough onto a well-floured work counter and gently press it until it is about 2cm thick all over.

5. Lightly dust all over with plain flour. Using a biscuit cutter, cut out eight 7cm circles from the dough. Arrange them next to each other on the prepared baking sheet. Lightly brush with the extra milk, then bake in the oven for 15 minutes, or until risen and golden.

6. Transfer to a plate and cover with a clean dish towel. Serve warm and spread with cream.

This story Is the chicken parmi our national dish? first appeared on The Canberra Times.