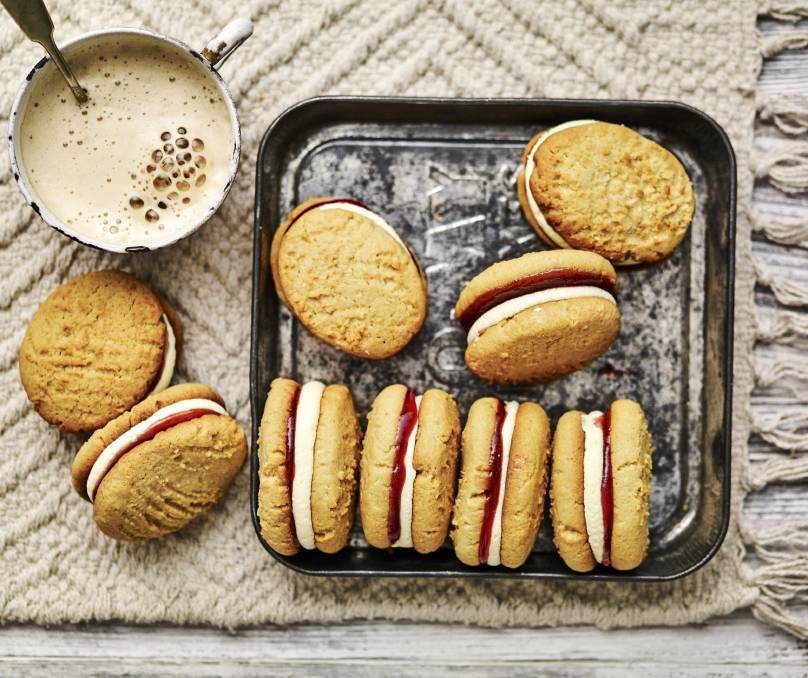 Monte Carlos are a familiar treat in the biscuit container. Picture: Supplied

There's nothing like a sweet treat to brighten up your day. Here's a couple of familiar recipes from the Australian Women's Weekly team and a comforting cake to use up the best of the season's produce.

2. Beat butter, vanilla, sugar and egg in a small bowl with an electric mixer until smooth. Transfer mixture to a large bowl; stir in sifted flours and coconut, in two batches, until combined.

3. Roll level tablespoons of mixture into oval shapes (you should have 44 ovals); place 2.5cm apart on trays. Flatten slightly; rough surface with a fork.

4. Bake for 12 minutes or until a biscuit can be pushed gently without breaking. Leave biscuits on trays for five minutes before transferring to wire racks to cool.

Cream filling: Beat butter, vanilla and sifted icing sugar in a small bowl with electric mixer until pale and fluffy. Beat in milk until combined. 2. Beat eggs, almond meal and sifted icing sugar in a small bowl with an electric mixer until thick and creamy. Transfer mixture to a large bowl; fold in sifted flour, then stir in melted butter.

5. Spread each mixture onto a lined tray inside marked rectangles. Bake cakes, one at a time, for seven minutes or until firm to the touch.

7. Turn each hot sponge onto sugared baking paper; peel away lining paper. Trim cake edges with a sharp knife. Using paper to help, gently roll up each sponge from a long side; place seam-side down on a wire rack. Cover with a clean tea towel; stand rolls for five minutes. Carefully unroll cakes; cool.

8. Meanwhile, beat cream in a small bowl with an electric mixer until firm peaks form, without overbeating. Refrigerate until required.

9. Spread plain sponge with cooled jelly. Spread a thin layer of the cream evenly over all three sponges. Re-roll the sponges tightly. Enclose rolls in plastic wrap; refrigerate 30 minutes. Just before serving, remove wrap; cut each roll into four pieces. Dust with sifted icing sugar, if you like.

Tip: Refrigerate remaining whipped cream for another use.

Swap: Use raspberry jam instead of the redcurrant jelly. 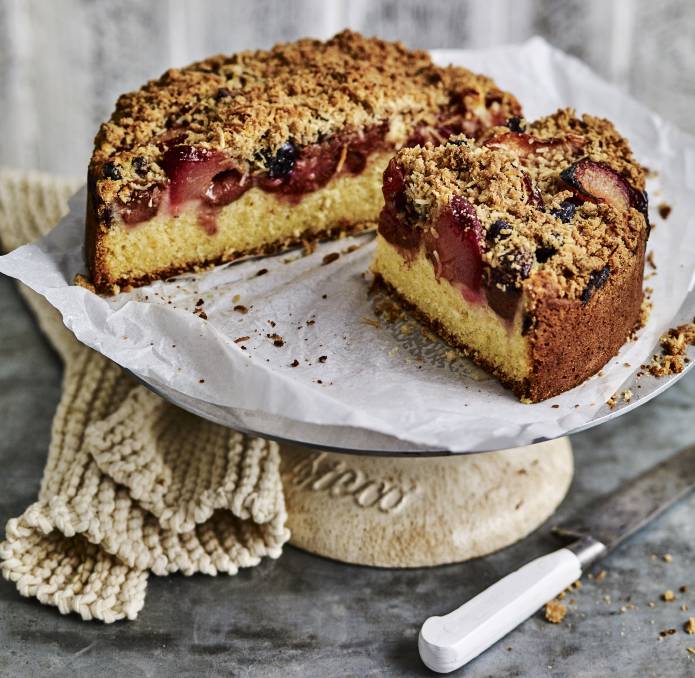 Use the best of the season in a plum and blueberry crumble cake. Picture: Supplied

1. Preheat the oven to 160C. Grease a deep 22cm springform pan; line base and side with baking paper.

3. Beat butter and sugar in a medium bowl with an electric mixer until pale and fluffy. Beat in eggs, one at a time, until just combined after each addition. Transfer mixture to a large bowl; fold in sifted flours and milk, in two batches, until the mixture is smooth. Spread mixture into pan.

5. Bake cake for 1 1/2 hours (cover loosely with foil if cake starts to over brown) or until a skewer inserted into the centre comes out clean. Leave the cake in the pan for 10 minutes before transferring to a wire rack. Serve warm or at room temperature.

Tip: If fresh plums are not in season, increase the quantity of whole plums in a jar to 1kg.

Keeps: Store cake in an airtight container in the fridge for up to three days. Reheat slices in the microwave to serve warm. 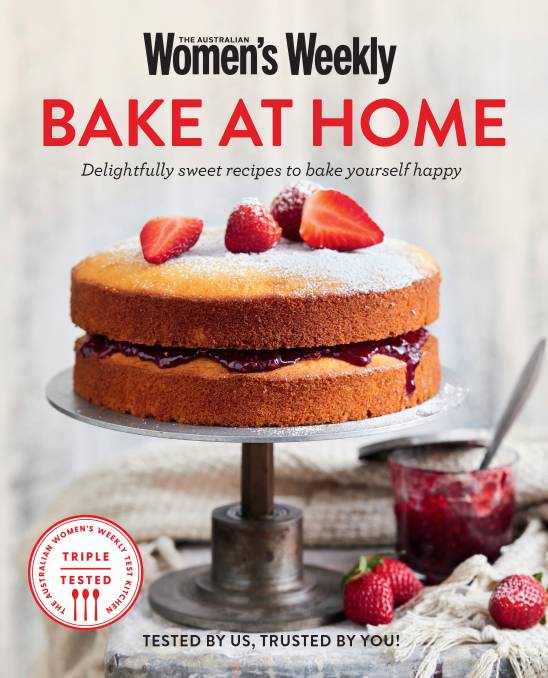 This story Bake yourself happy: brighten up your day with a sweet treat first appeared on The Canberra Times.