As signs emerge that Australia's prudential regulators could be about to make another intervention in lending markets, we take a look at what any changes could mean for homebuyers.

What's with all the recent fuss about lending standards?

Australia's property prices have surprised many commentators by booming during the COVID-19 pandemic, but it's not the outright cost of housing that's got banking authorities worried.

Instead, the level of highly-leveraged lending activity during the pandemic has the Reserve Bank of Australia on high alert.

Read more: What is Evergrande and why does it matter to Australia?

In a speech on housing last week, RBA Deputy Governor Michelle Bullock raised concerns about the growth in credit exceeding the growth in incomes.

"A high level of debt could pose risks to the economy in the event of a shock to household incomes or a sharp decline in housing prices,"

Around 22 per cent of borrowers are now borrowing in excess of six times their income, according to the most recent figures.

"Whether or not there is need to consider macro-prudential tools to address these risks is something we are continually assessing," Ms Bullock said.

This week there have been reports that Treasurer Josh Frydenberg has given the go ahead to regulators to enact new curbs on lending activity in order to clamp down on risky borrowing activity, limiting the size of new loans that can be taken out by borrowers proportionate to their income.

Any new policies will be enacted by the Australian Prudential Regulation Authority (APRA), the banking sector's peak regulatory body.

APRA has the power to dictate the conditions lenders must satisfy before issuing a loan to borrowers. It is likely to do so in consultation with the Council of Financial Regulators (CFR), of which it is a member alongside the RBA, the Australian Securities and Investments Commission and the Treasury.

In a statement issued following it's latest quarterly meeting, held last Friday, the CFR confirmed that it was actively considering tightening lending conditions.

"The Council is mindful that a period of credit growth materially outpacing growth in household income would add to the medium-term risks facing the economy, notwithstanding that lending standards remain sound," the statement read.

Hasn't APRA done this before?

It's not the first time lending curbs have been instituted by the prudential regulator in response to credit growth.

CoreLogic head of residential research Eliza Owen explained that a spike in investor lending, as a result of low interest rates, in the first half of the previous decade had convinced APRA, in consultation with the CFR, to enact stricter lending conditions.

"ABS housing finance data suggests that by April 2015, the value of housing finance lent for the purchase of investment property represented 46 per cent of all finance commitments for property purchases - in other words, investors were making up almost half of the market. In NSW, this proportion peaked at 55.5 per cent in the same month - more money was being borrowed for investment housing than owner-occupied housing," she said.

"While the RBA [at that time] would not specifically address rising house prices, they would work with the council of financial regulators to ensure sound lending standards," she said.

"In December 2014, APRA put a speed limit on growth in housing lending to investors of 10 per cent per year, with supervisory actions to be considered for banks that did not comply. This was a temporary measure that was repealed in 2018. In addition, assessment serviceability rates for home loan repayments had a recommenced floor of 7 per cent, to ensure people could repay loans at higher rates. This was eased in mid-2019."

What's different this time around?

The spike in investor lending last decade was largely restricted to the east coast, and to investors.

"Anecdotes emerged [before APRA's last intervention] that during the strong capital growth environment across cities like Sydney and Melbourne, where annual dwelling growth rates through this cycle peaked at 20 per cent and 14.4 per cent respectively, was incentivising buyers to purchase housing with interest-only loans, and then selling at the end of the interest only period, reaping the capital gains," Ms Owen said.

"We also saw the rise of the 'rentvestor' during this time, suggesting that for some first home buyers, it made more sense to buy an investment property than buy their first home." 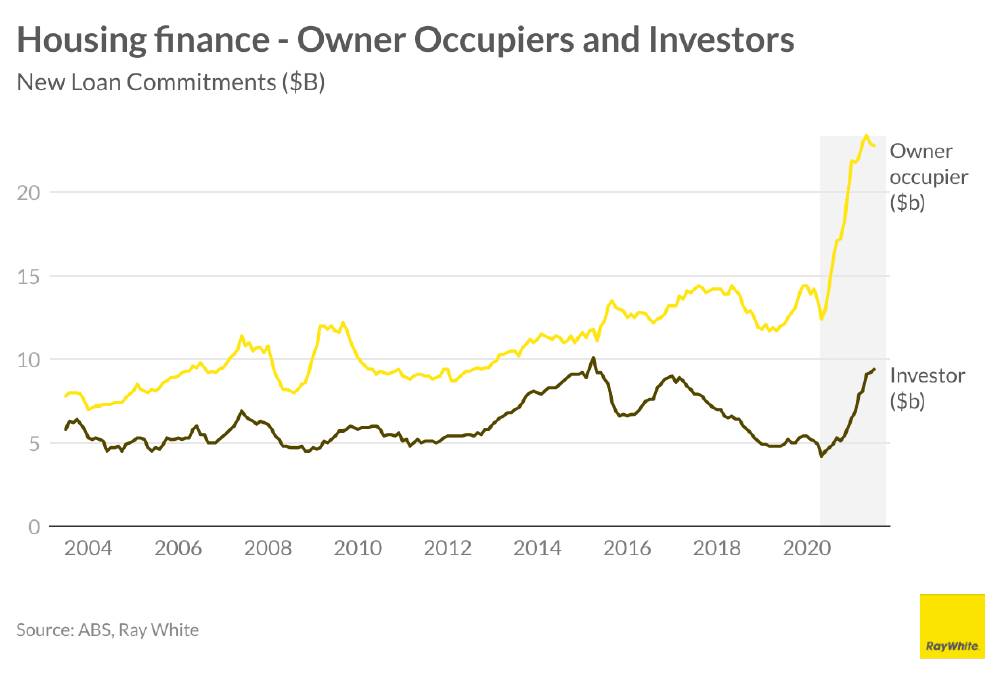 The spike in lending activity is more pronounced among owner-occupiers this time around. Photo: Ray White

The situation in 2021 is different in that lending growth is a nationwide phenomenon and isn't restricted to investors, according to Ray White Chief Economist Nerida Conisbee.

"This time around, it isn't just investors that are borrowing a lot. In fact, the total borrowed by owner-occupiers has increased a lot quicker. As a result, it will be necessary to target lending more broadly," she said.

Any regulatory intervention must also be considered against the backdrop of the COVID-19 economic recovery.

"They [APRA] will also have to mindful of the timing, given both Sydney and Melbourne are in lockdown. The economy and the housing market remain strong but we are still in a precarious position. We still have closed international borders, there is still little agreement between states on opening borders, iron ore prices dropped significantly last week. If they move too hard and house prices start dropping dramatically, this will lead to a hit on household confidence," she said.

Regulators would be walking a "tightrope", according to Ms Owen.

"... a rapid fall in house prices resulting from changes to lending conditions could hinder some of the stellar economic recovery we saw coming out of the 2020 lockdowns. Housing market activity sees jobs in construction, white goods, renovations etc., and rising prices also create a wealth effect, creating confidence to spend more on other goods and services," she said.

"The aim is to take the heat out of lending [and] there are a number of things they can do," Ms Conisbee said.

This could include requiring borrowers to have bigger deposits, increasing stress testing of borrowers (by testing whether they could cope with a hypothetical future rate rise), restricting the number of interest only loans held by banks, restricting the growth of lending or restricting loans relative to income.

Some of these mechanisms had recently been enacted by the Reserve Bank of New Zealand.

"In New Zealand, where house prices have increased far more rapidly in Australia, investors have needed a 40 per cent deposit since May - this slowed the market almost immediately," she added.

Ms Conisbee said that it would make more sense for lending standards to change in the current economic environment as opposed to other interventions which have recently been touted, such as the RBA increasing interest rates.

"There really isn't a limit to what it [APRA] can achieve with regards to lending and [it] also allows for greater targeting of borrowers that are deemed more risky. It is certainly a more targeted tool than monetary policy - it wouldn't make sense for the RBA to increase interest rates purely because house prices are rising rapidly," Ms Conisbee said.

It didn't take long for APRA's previous changes to make their impact on the lending market and house prices, according to Ms Owen.

"Banks had to comply fairly quickly with tighter lending standards, and to this day the portion of new lending on interest only terms is only at around 19 per cent, compared to a record high of 45.6% in the June quarter of 2015."

"It was very soon after the introduction of the interest-only loan limit that the housing market started to turn, and many think it may have been the catalyst for a housing market downturn, which was a peak to trough decline nationally of -8.4% in value, lasting from November 2017 to June 2019," she said.

"However, it's important to note the council of financial regulators were not necessarily targeting house prices - it's not certain a house price fall is a 'success' for the RBA when they trying to stimulate the economy," she said.

Lending changes have the potential to affect house prices, Ms Conisbee said, but the root cause of property price growth was unlikely to be addressed by macroprudential policy alone.

"There are two issues - house price rises and increases in debt people are taking on. APRA and ASIC are targeting debt, which in turn will impact house prices.

This story Explainer: APRA, lending limits and what it means for house prices first appeared on Newcastle Herald.