Peter Papathanasiou doesn't want to reveal exactly where on mainland Australia his new novel, The Stoning, is meant to be set. But it doesn't really matter.

The Stoning, he says, is not intended as simply a murder mystery - it's also a journey into the Australian character and psyche.

Its setting - the small, isolated (fictional) outback town of Cobb - is, he says, a microcosm of Australian society, particularly with regard to issues such as racial relations, multiculturalism, asylum seekers, unemployment and drug problems.

"It's about how far we've come and how far we still need to go."

The story begins with a grisly crime. A school teacher, Molly Abbott, is found dead, taped to a tree and bloodied and battered by stones.

Detective Sergeant Georgios "George" Manolis has been sent to Cobb, where he lived as a child, to lead the investigation into the murder.

The town has changed somewhat since Manolis lived there - a controversial immigration detention centre has replaced the local TAFE which itself replaced a refugee camp - but in other ways it doesn't seem to have changed much at all. It's a place rife with prejudices, secrets, gossip, violence, and despair.

Manolis works with the local cops - Sergeant Fyfe and his two constables - who have their own way of doing things that's not always by the book.

The local police station is under-resourced and Manolis, the interloper, soon realises it's not going to be an easy case to crack. Molly seems to have been well liked by everyone and the killing was brutal.

Could the stoning have been carried out by one or more of the Islamic asylum seekers, who are allowed out of detention each day with a curfew? If not, who could it be? And why would anyone do it?

Papathanasiou remembers the inspiration for The Stoning.

"I started writing it in 2014, seven years ago now, while I was living in London."

He was sitting in his apartment one afternoon. It was 4 'o clock on a cold winter afternoon, and already the sky was dark. Outside, the streets were very congested.

"It was an effort to go to the supermarket - you had to walk past 100 people. I transported myself back to Australia - it was my way of escaping.

"I had the idea of a hot, desolate, remote place."

He was undertaking a Master of Arts degree at City, University of London in creative writing. Initially he was in the literary fiction stream but moved to the increasingly popular crime stream. Inspired by Australian crime writers such as Temple and Jane Harper (The Dry), he decided to make the book that would become The Stoning an "outback noir".

Another inspiration for the book was Shirley Jackson's short story The Lottery, first published in The New Yorker in 1948, which caused a sensation.

Papathanasiou had graduated with honours in law from the Australian National University, specialising in criminal law.

"I'm interested in crimes and the motivations for people committing crimes as well as the investigations and evidence."

This background provided some of the information he needed for the story and he did his own research.

Since he was dealing some sensitive subject matter he sought guidance. A gay friend read the story and didn't find anything objectionable from that angle.

"If you have any vulnerable members of a community, when they are represented in literature or film or on screen a cultural reader is required to ensure their stories are accurately and sensitively told."

Since he had Indigenous characters he engaged the First Nations Writers Network to work with him on the manuscript.

"There was a process of editing and rewriting," he says. He changed a reference to an "Aboriginal camp" to "Aboriginal community" and tweaked a scene that contained a group of unruly, hostile teenagers.

"They don't have to be Aboriginal kids - they can just be kids."

He also consulted people in the refugee and asylum-seeker community since this was a big element of the story.

His own travels through outback Australia provided inspiration for some of the settings, feelings and characters of Cobb. 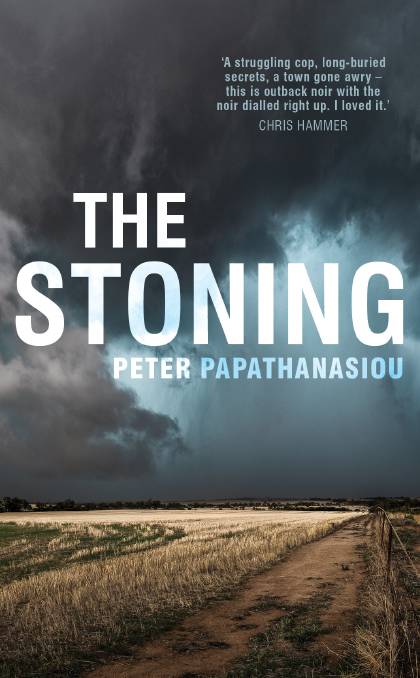 "Rural country seems to be 'man's land,'" he says.

A woman, he says, is often regarded as "just a sheila" in the outback and it was important to him both to show that such attitudes do exist and also to have a strong female character in the book, Constable Kerr, to challenge them.

There was, he says, a MeToo element to the story - the movement and intense discussion of toxic masculinity took off while he was working on the book.

Characters and their names had a range of inspirations. He paid homage to Peter Temple's Indigenous character Paul Dove with the bird nickname of the other constable, Andrew Smith - known as Sparrow - who is gay and pays a heavy price for being himself in a narrow-minded community.

The detention facility's direction was named Frank Onions because "It's a disagreeable food - it makes you cry."

As for Manolis, Papathanasiou says the cop has some of his traits - like a tendency to talk to himself out loud, often in Greek - but the author is "a bit more gregarious" than his creation.

In that sense, Manolis is based more on one of his brothers, who's a bit more restrained with others.

"He's shy and will try to work out what's going on before he says anything."

While Papathanasiou raises many issues, he says, "I don't offer solutions - it's impossible to.

"My goal is to show that there is a side of Australia we're not necessarily proud of - it's a story that needs to be told to raise people's awareness."

He acknowledges that the issues he raises are not unique to country Australia or even to Australia but loved the idea of situating his book in the outback - "cinematic, evocative, living in perilousness".

Part of that peril - mobs of unpredictable kangaroos on the road - is featured in The Stoning and he's familiar with that particular danger since the marsupials are frequently seen in Hackett, where he lives.

Papathanasiou, who is also a geneticist, now works for the Department of Health. Writing is, at present, a sideline, but might one day become his full-time occupation.

His first published book was the memoir Little One. It told the true story of how his parents, who migrated from Greece in 1956, could not have children of their own - his mother had three miscarriages. His uncle and aunt in Greece were in fact his birth parents who had him as a family favour. They already had two sons of their own. He was not told about his true parentage until he was in his 20s, by which time his birth mother had died.

Papathanasiou had written an earlier crime novel, unpublished as yet, and learned a lot from the experience. He is working on another book and intends to bring back one or more of the characters from The Stoning. This might be the start of a series.

"It's the beginning of a journey for me."

This story Examining Australia's dark side first appeared on The Canberra Times.