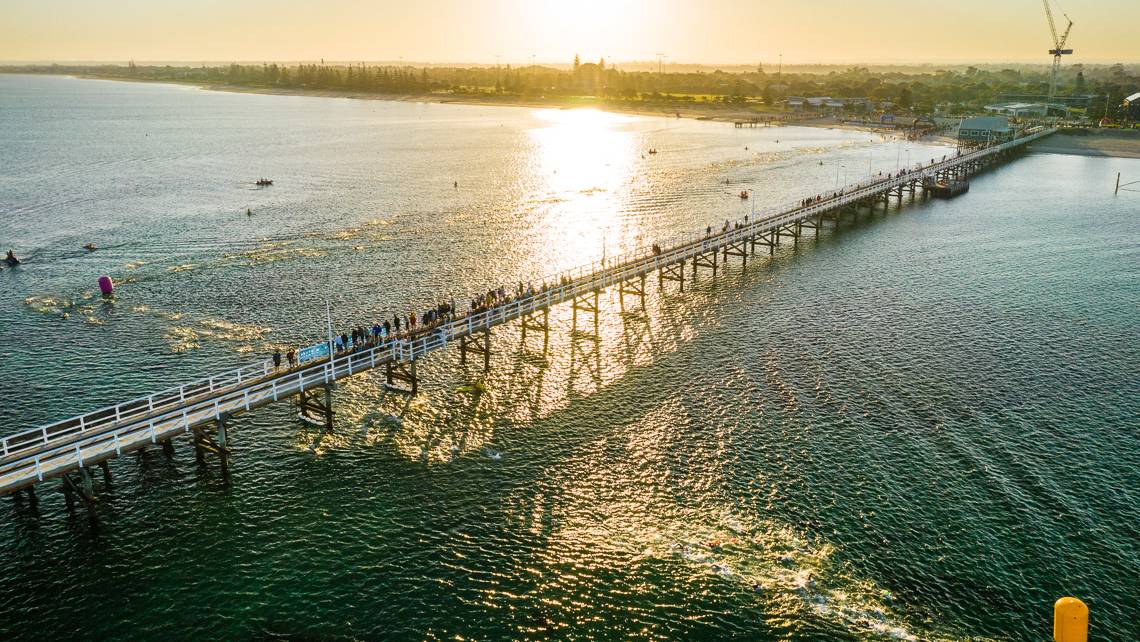 The 2021 GWM Ironman WA event on December 5 was full of twist and turns before Matt Burton and Kylie Simpson take out the titles.

The 3.8km swim leg started the race but it was the bike leg which saw lead changes in both men and women's category.

Over the first half of the bike leg the leading trio of Steve McKenna, Lachlan Kerin and Fraser Walsh all took turns at the front, powering their way over the flat and fast Busselton course.

West Australian athlete Matt Burton was more than two minutes behind the leading group, making his move to close the gap in the final 30km.

Kerin headed into transition in Busselton just 16 seconds ahead of Burton, with McKenna more than three minutes further behind in third.

In the women's race Kate Bevilaqua took a nine minute lead onto the bike, ahead of Sarah Thomas and Kylie Simpson.

Simpson, the reigning Ironman Asia-Pacific champion, chipped away at Bevilaqua's lead, moving into first position at the 115km mark.

Simpson headed onto the run over seven minutes ahead of Bevilaqua, with Thomas in third.

Burton had a remarkable race after he left the water in eighth position and proceeded to chip away at the leaders over the bike leg and was just seconds behind the leader at the transition into the run.

It was over the run where Burton excelled, taking the lead early and never looking back, continually extending his lead on his way to his first IRONMAN Western Australia title.

"You do something for so long but you never think that this day will come, with restrictions there may not be a full flock here but when you persist at something for long enough, it comes off," he said. 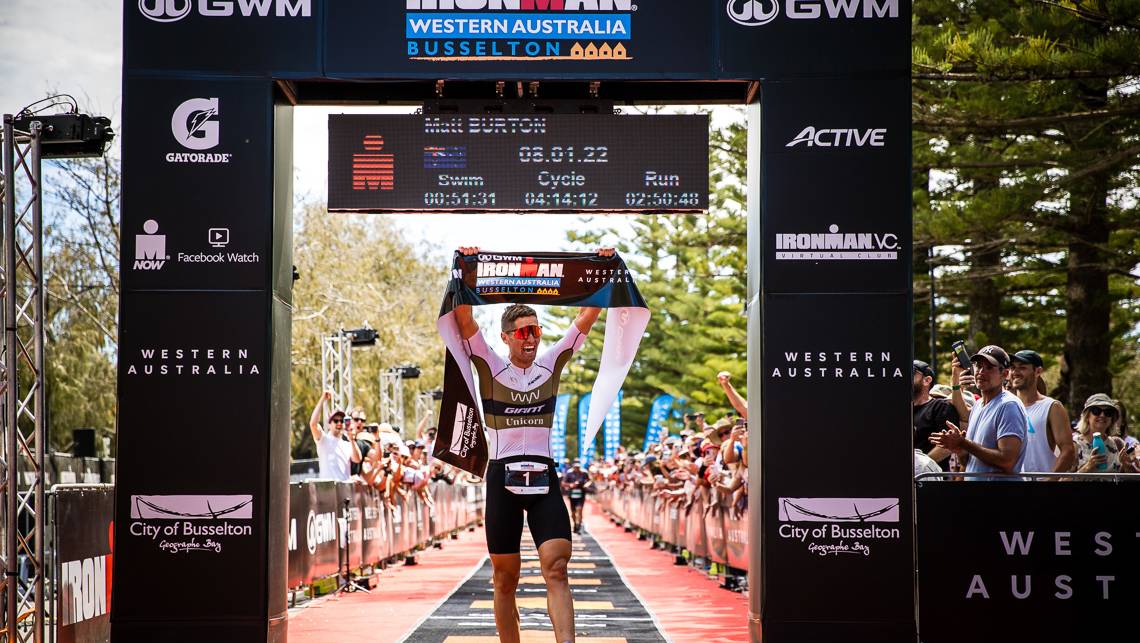 "For all my family, close friends, we had a little boy the other day, they all had a much bigger day than I did today, but it's just a massive team effort, it might be one of the most individual sports in the world where we're very isolated all day but there are so many people behind the scenes.

"I have such a close, supportive group of family and friends and people who treat me and keep my body in good condition when all I do is complain and whinge.

"The swim was beautiful, the new swim course with an exit on the beach in the middle was cool.

"Then I found the wind on the bike course very variable, I've trained down here a lot and we seem to not get any assistance one way at all, it was very much an easterly cross breeze for most of the day and then it got very hot.

"It became a war of attrition rather than a war of speed and I just had to hang in there, I knew the boys were going to come at me on the run."

It was an emotional victory for Burton, who with his wife Kim had their first child, a son Tom, earlier in the week.

"I really battled today, it didn't feel like it went my way at all and I keep having this thought that I had to be like my son Tom," he said.

"He didn't know what was going on the other day coming into the world and he just had to cop it and I thought you know what I've just got to cop it today and who would have thought I'd run to win.

"Tom was due today and he arrived a week early to allow me to get down here and sneak the race in, little does he know I'm super proud of him for coming early, I just hope I made him proud."

"It's a big year, but we've been stuck in Oz for two years now, I'll take every opportunity to move around next year," said Burton.

"You've got to race against the best, two opportunities to race for world titles is fantastic and it will be an exciting year for the sport."

Simpson made it two Ironman wins from two starts in 2021. 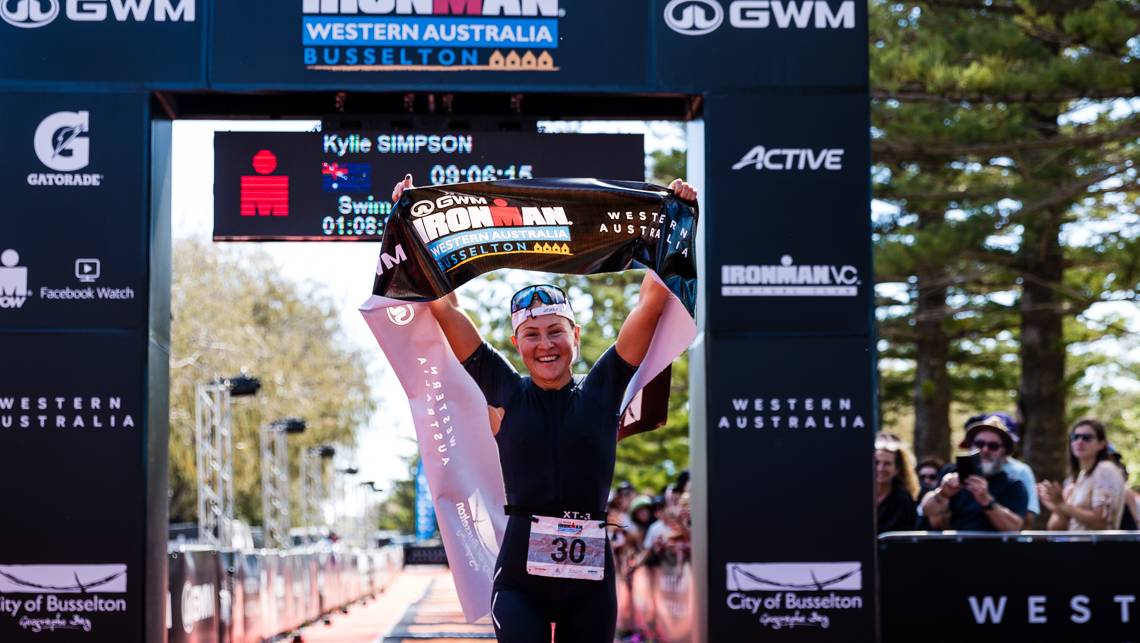 Kylie Simpson was the first female across the line in the Busselton Ironman event.

"It was good, it's always good when you win. The whole course is spectacular but I really enjoyed the bike today, I felt great on the bike," she said.

"Everyone knows that swimming probably isn't my favourite of the three and I loved the swim, the ocean is absolutely amazing here. The support on course today was amazing, it made it a lot easier."

Brisbane-based Simpson has been training for this event for a number of months, but was only sure she could make it across the country in recent weeks.

"We didn't know if we could get over here and about four weeks ago we found that we could, Busselton was always on the cards so we just kept training just hoping that restrictions would lift," she said.

"We just made the call that we'd go all in for Busselton and cross our fingers that we could get here to race."

Like Burton, Simpson's win today secured her a spot at a second Ironman World Championship event in 2022.

"Once again it's going to be based on travel, we'll be able to get to both of those destinations, not sure what else we can get to, over the next few months we'll put some plans in place once we get a bit closer and know what we can get to," Simpson said.

'"I've never raced in America so that will be a first, that will be good and we'll study the course and train accordingly."

Simpson finished the 3.8km swim more than nine minutes behind Bevilaqua, slowly eating into her lead over the first half of the ride, before making a move for the lead at the 115km mark.

From that point on Simpson surged ahead, extending her lead over her preferred run leg to take the win.