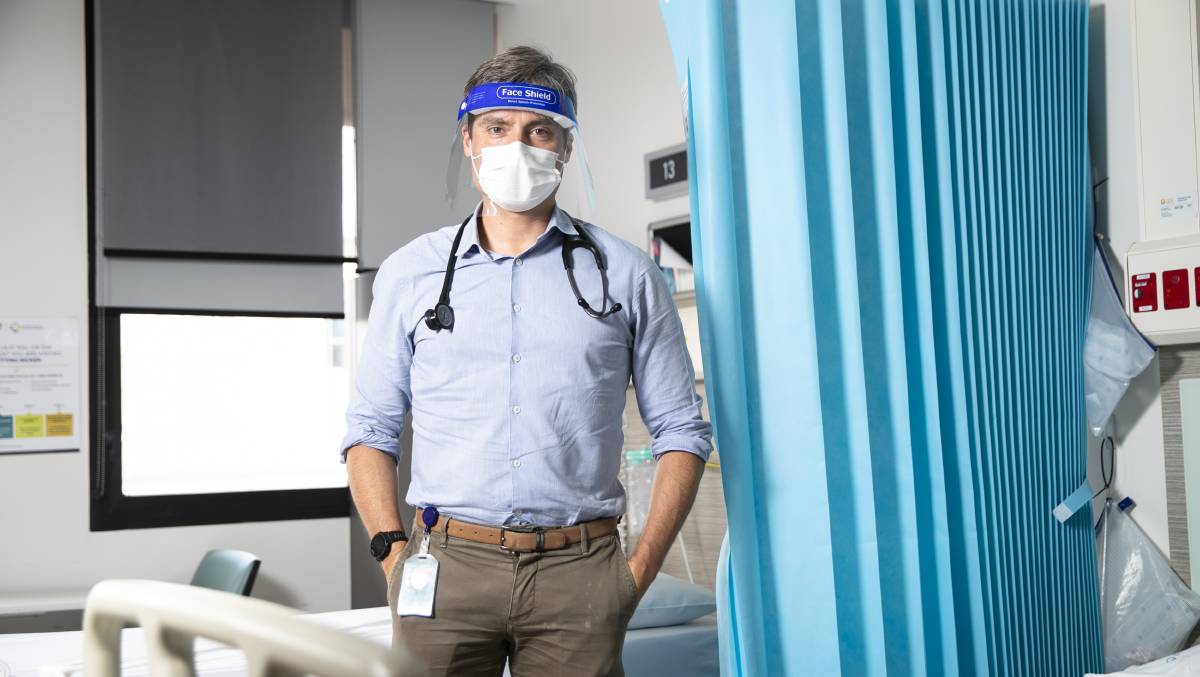 For an in-demand infectious disease specialist and one of the faces of the COVID-19 pandemic in Australia, Dr Nick Coatsworth is in a bind about what to do next.

After two decades in public health, the departing Executive Director of Medical Services Group at Canberra Health Services and former Deputy Chief Medical Officer is charting his next big career step as he says goodbye to the ACT hospital system.

"I've engaged the services of an executive career coach. Which I didn't really know existed, but there you go," he told The Canberra Times.

"And we're just working through some of the opportunities that the past two years have brought for me."

Now, Dr Coatsworth has revealed a keen interest in politics beyond the next federal election.

However, he's frustrated by pandemic politics, and in a carefully worded rebuke to more risk-adverse chief health officers, he is concerned that the "social contract" between health officials and vaccinated Australians is being broken. He also took aim at state premiers who have at times gone against health advice.

"I'm choosing my words carefully. I think that if the country is going to move forward into 2022 then we need leadership from our chief public health officials," he said. "That includes a less risk averse approach to COVID-19."

"And why is that important? Well, there's a social contract that over 90 per cent of Australians have fulfilled in getting themselves vaccinated, that an entire state has fulfilled in Victoria in being locked down for over 280 days. And the repayment of that social contract is to not be overcautious for the third year of the pandemic. I think that's going to be important."

Dr Coatsworth has been front and centre in Australia's staring down of COVID-19. And now as the world is being tested by Omicron, he says the early signs are "encouraging" for a milder presentation of disease.

"I think we should take the precautions, but I think every day we're finding that it's probably not going to be Delta," he said.

Amid all the controversies and polarisation of COVID, vaccines and lockdowns, the high-profile doctor has felt responsibility in "putting his head above the trenches" to become a leading firm voice for learning to live with the virus.

This position has made him a social media target and pitted him against other public health figures.

Pandemic politics is, to him, frustrating, unnecessary and overdone. "Particularly, the Andrews/Berejiklian tit for tat, which if you did an analysis of that, I think it did come from one individual more than the other one," Dr Coatsworth said. "But you know, there was stuff thrown in both directions."

"Unnecessary, that the reality of this pandemic is that there is not one chief health officer in this country who has the expertise to deal with this problem on their own in their own state, which means that they need the wisdom of the collective at the AHPPC (Australian Health Protection Principal Committee). The Premiers have done their chief health officers a disservice by not allowing them to truly offer independent advice through the AHPPC and instead chart their own path."

"Now, the problem with that is you end up with stuff like, don't touch the football. And that sort of erodes a bit of public trust to start with."

Closer to home, he wants to vouch for a significant shift in culture in Canberra's hospitals. Canberra's public health system has been dogged by reports of a toxic culture, including bullying and harassment and routine poor performance. Dr Coatsworth says the hospital system, particularly Canberra Hospital, has come a long way since he started there in 2016, particularly in the past few years.

Without naming names, Dr Coatsworth says there has been some key departures combined with the values based leadership of Bernadette McDonald to the now CEO Dave Peffer.

The Canberra Times understands several high profile staff have left in the past month.

"So I think it's at a place where people are starting to enjoy working here more, that's the thing," he said.

"I think we've got the cultural review oversight group, we had the major report. The whole of the hospitals responded to that. You can tell when you're walking around on the wards, there's just a different buzz to the place."

"Now that we've got the base cultural elements heading in the right direction, we can start turning ourselves into one of the best, if not the best, health service in the country. I think that's a 10-year plan, but I definitely think we're on the right track." Construction of a new state of the art Critical Services Building is underway and Dr Coatsworth says maternity services have turned around from recent troubled, and for some patients, traumatic birthing experiences. He points to a new Executive Director at the Centenary Hospital for Women and Children as demonstration of a "culture of continuous improvement."

He also believes the hospital has performed well during the pandemic, even the recent break out in the special care nursery.

"I think special care showed us that we can manage the hospital outbreaks. I think that we all feel a lot safer," he said.

"We have had literally thousands of staff exposures in the past couple of months and less than five transmissions that just shows you that our infection controls are working, then it's not as scary and then in a vaccinated population."

So what does Dr Coatsworth want to do now?

"I think there's room for it," Dr Coatsworth added. "Everybody says there's always room for a new brand of politics, but to think that one person could change that?"

"There's lots of people who have tried that; Peter Garrett, Cheryl Kernot. It never works. You always end up getting to some extent co opted by the party that you're part of."

He says he has not been approached by a major party, but it could be a way to do what he really enjoys doing, which is "talking and engaging with people."

"And the pandemic gave me a strong opportunity to do that," he said.

"I wouldn't mind exploring the private sector, I've been in public [health], or not for profit, for the past two decades. So there's that as an option. And yeah, but it could be that through all this thinking, it comes back to just running a great hospital."

Or perhaps advising the next federal health minister, whatever side wins the next election.

"I would love to provide that advice if it was asked of me, for either side of politics," he said.

"Probably not in a formal position. But, look at Brendan [Murphy] as [Health Department] Secretary. Someone coming in and actually having been a practising clinician and now they're secretary of Health. That's revolutionised the Health Department. He's a bit of a mentor. I love to do what Brendan has done."

This story Politics, private or public all the way: What is next for Dr Nick Coatsworth? first appeared on The Canberra Times.