ANYONE who has ever heard, seen or spoken to Courtney Leigh Hollins, knows that she does not fit the stereotypical mold of an influencer.

She doesn't start any of her YouTube makeup tutorials with the stereotypical, "hey you guys, welcome back to my channel!".

Self described as "an inappropriate makeup artist who is not for the weak", the Dawesville-based makeup artist who runs 'Centre of Attention Makeup Artistry', has over 75,000 Instagram followers, 20,000 subscribers on YouTube and 343,000 followers on Facebook.

In the five years since the Mail last caught up with Ms Hollins, she has done a lot.

She has taken out the title for the 2018 Australian and New Zealand FACE awards.

She has launched her own face paint palette and makeup brushes. She's had another daughter. 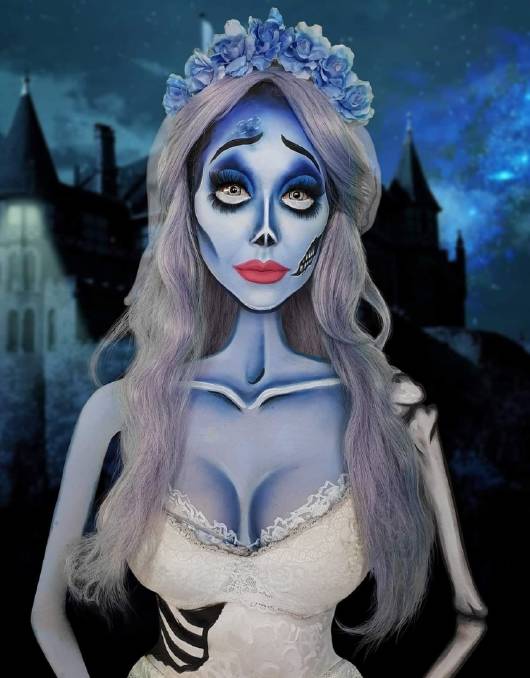 But most notably of all, she has established herself as one of Australia's top makeup artists who became an influencer through solely "being herself".

Ms Hollins proudly told the Mail that her "reaction to bulls***" was what attracted people to her online.

"I'm just true to who I am, which I think has been the major selling point," Ms Hollins said.

"And I've never considered myself an influencer - I've literally just sat there and talked life and done makeup."

Being true to yourself

Up until age 15, Ms Hollins said she had a mentality of, '"if it will offend or trigger someone, don't do or say it". 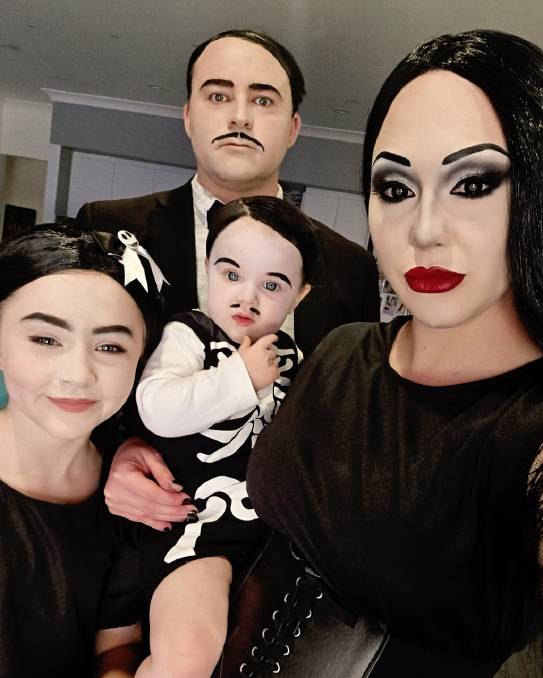 But it was moving from Perth to Geraldton for years 11 and 12 that kickstarted a new attitude in Ms Hollins - that she credits to a single event when she first started high school.

"I just remember saying to myself the day before my new school that I can either continue on this path and always tiptoe around people's feelings - or I can just stand up for myself now." 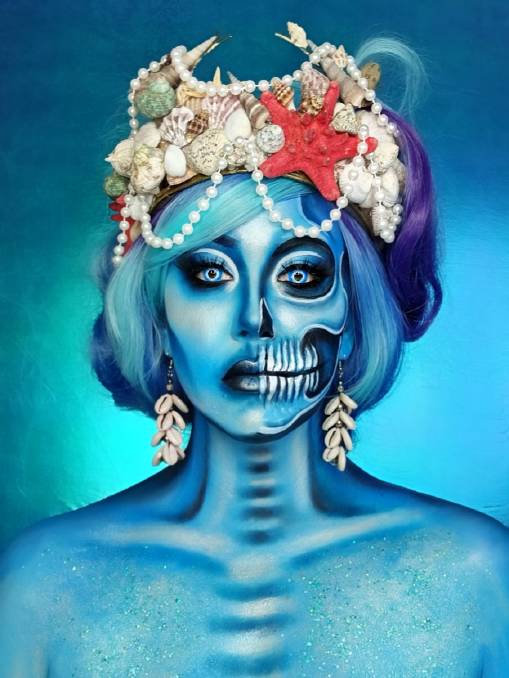 Creature from the deep: One of Ms Hollins thousands of makeup looks. Picture: supplied

"On the first day at school, some girl came up to me and said 'hi I'm so and so, I'm really nice but don't get on the wrong side of me'.

"And I remember this rush of adrenaline as I stood up and said, 'well, what happens if I do get on the wrong side of you? What are you going to do about it?'

"And she just stood back and said 'oh don't worry about it, I was just playing around.'

"From that one moment of stepping out of my comfort zone to stand up for myself - I was changed."

Ms Hollins said today she had adapted that mentality to her work at Centre of Attention, with her brutal honesty and ability to call out bullying from 'keyboard warriors'.

Ms Hollins said she always managed to get her "creative itch" out of her system, even when she worked as a pharmacy assistant in her early 20s.

"Art was always a part of my life and I always found a way to get my creativity out there," she said.

"My boss was amazing and let me design the advertising and sales boards.

"But in the end I just wanted a job where I could interact and help people, but still be majorly creative.

Around the same time she left the pharmacy, Ms Hollins found out she was pregnant, which is what "kicked her" into gear.

"I wanted to do something I could do at home, so I did a makeup diploma in 2016 even though I didn't know much about makeup at all. 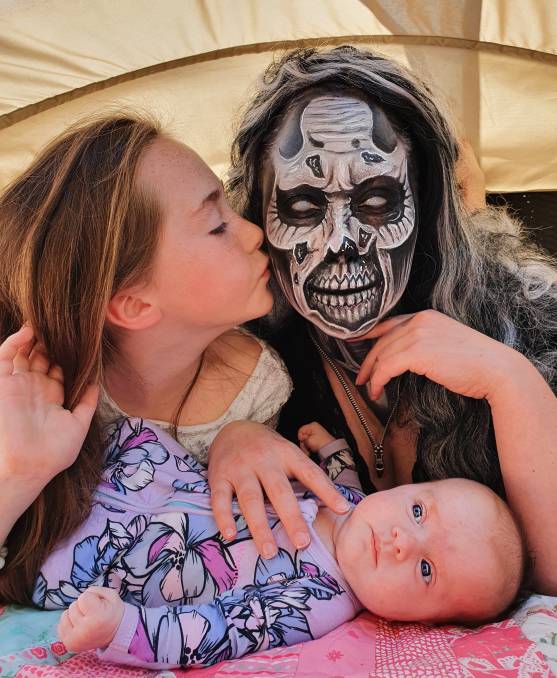 Not a 'regular' Mum: Ms Hollins with her daughters, Jordy and Korbie Quinn. Picture: supplied

"I started the diploma after Jordy was born, and in the first week I knew it was what I wanted to do."

Ms Hollins credits the support of her partner, John Quinn, as the "safety net" that supported her in building her business up "from nothing".

She said they had been engaged for 11 years.

"John was so supportive when I first started studying," Ms Hollins said.

"I reckon if I had been with any other bloke, they'd say 'no, you're not quitting your job, you have to help out'. But John wasn't like that.

"I wouldn't have been able to do it without him - no that's not a marriage proposal John!" She laughed.

With two daughters and a world shared almost fully online, Ms Hollins has dealt with her fair share of 'keyboard warriors' and judgement.

She noted how especially after her second daughter Korbie was born, it wasn't uncommon for people to question her ability to be a parent when her girls were exposed to all elements of her work, including fake blood.

"One of the most unfortunate things about social media is that it's given people a safety net to say anything they want and be protected - I doubt someone would walk up to me in the street and say something negative to my face, so why is it okay for people to say negative things online?

"Jordy has just turned 10 and has grown up around this stuff, so she's not sheltered as far as fake blood and gore goes.

"Sometimes she'll walk into my makeup room and say 'mum, that needs a bit more blood' or' mum, that looks fake'."

Ms Hollins offered the following advice to the community, especially anyone who is thinking it's "too late" to pursue a new career.

"What I have learnt in my career is that everything in life is a risk, but you don't know if it's going to work out unless you get out there and do it.

"If you want to do something, just get out there and bloody do it, because if we start losing ourselves, what is left?

"When I go online, I don't pretend, I just run my mouth and off we go."

On creating your own brand

In the last five years, Ms Hollins has adapted her brand which she now describes as "artistic, creative and colourful craziness", which has helped her reach thousands of people all over the world.

A brand "all about community", she said "Everyone and anyone" can learn makeup by her.

"If people can get past my swearing, they'll realise 'wow, she actually knows her stuff'," Ms Hollins laughed.

"People often email me saying 'Courtney, your videos have gotten me through such a hard time in my life', which is really cool because I never had that intention. 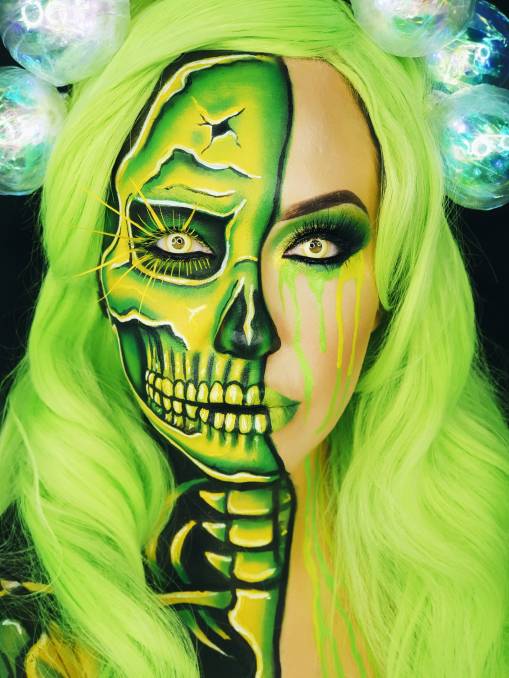 "My career has taught me that I can be majorly successful being myself - and how good is that? How many times do we bend over backwards and put on a facade because we think the public won't like that?

"But I never cared - because I knew my tribe was out there somewhere and I found them."