The 63-year-old singer-songwriter featured in the national live Australia Day broadcast this year and uses his music to inform others that it's alright to show your scars.

"Your scars are a sign that you've been injured but you've healed," he said.

Mr Bozanich has had his fair share of scars.

Last year he was bashed in his home and suffered a brain injury; and was given two weeks to live due to complications with his liver from excessive drinking.

The love of his life was raped and murdered over 30 years ago, and he was addicted to heroin for 35 years.

Sydney-based musician and friend of Mr Bozanich's, Luke Escombe said after the assaulted last year he never really knew if he would play again.

"He thinks it's going to be one of the best nights of his life and he can play all 20 songs in a row. He's feeling strong and excited to share his music with people.

"This CD has really given him a new lease on life." 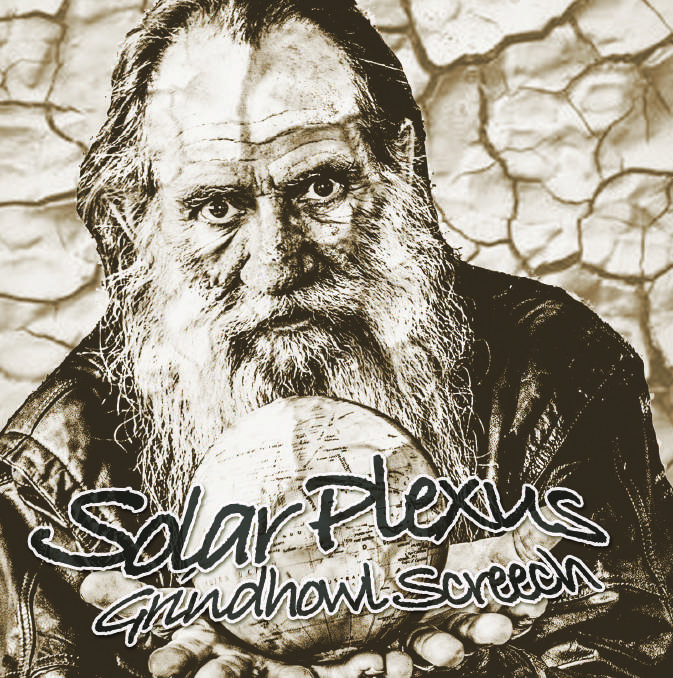 Solar Plexus is a collection of songs written and recorded by Grindhowl Screech between 2016 and 2018 in and around the town of Greenbushes. The CD artwork is designed by Melanie Escombe. Photo: Supplied.

Mr Bozanich eventually got clean, but the years of taking drugs and excessive amounts of alcohol had taken its toll.

"Last year I fell over in the lounge room and I couldn't get off the floor," he said.

"I rang a friend of mine, she came and helped me up and took me to the doctors and they basically told me I only had a couple of weeks to live."

However, his music has always kept him in good spirits.

"That's one of the reasons why I am doing this gig so people can see me playing and know what I do. I'm starting to feel like a Kardashian because I have become infamous, but nobody knows what I do," he laughed.

This CD has really given him a new lease on life.

Growing up in the small WA country town of Merredin, Mr Bozanich soon moved to Perth to play in his first band with his brother, before heading to Sydney to play in rock bands.

"In the early days I used to play in rock bands and I was a boy from the bush and I turned up in Sydney in the mid 70's and there were drugs everywhere," he said.

"I smoked pot, a lot of speed, and a lot of cocaine. It was just accepted everywhere you went. It was part of the scene."

Now living in Greenbushes he prefers a more serene and quiet lifestyle.

He said he loves living in a tight-knit community where everyone in the town knows him, normally as that stylish leather-clad hitchhiking fellow.

"They (the locals) have seen me on the side of the highway for over six years. I'm not a normal looking fella," he said.

That's one of the reasons why I am doing this gig so people can see me playing and know what I do. I'm starting to feel like a Kardashian because I have become infamous, but nobody knows what I do.

Mr Bozanich has a long beard. All his clothes are black. The only pop of colour he wears is the parrot feathers attached to one side of his hat. He polishes off the look with cuban heeled boots.

"Some people know me as that really well dressed guy with a beard," he laughed.

Underneath all of that is a man who has an absolute passion for music.

"All my songs are from my heart, spirit and soul," Mr Bozanich said.

He writes each song to reflect a true story, with many having several stories intertwined into one song.

"I generally like to start with the brutality of the story in the first couple of verses and then I like to round it off with hope," he said.

"I don't try and wrap it up cotton wool, or in sweet candy, but I try and leave a message behind and something that is important to talk about."

Solar Plexus is a compilation of songs from Leon Bozanich's previous three albums and one extended play record, which Luke Escombe chose. The CD artwork is designed by Melanie Escombe. Photo: Supplied.

He touches on themes such as; suicide, children who are starving, drive by shooting victims, and things people are experiencing in the world.

"I'm not singing about these things so people will like me," he said.

"I'm singing about these things to provoke some response in people. Some anger. Love. Some tears in their eyes. Something that hits them somewhere and effects their solar plexus. Which is why the album is called that."

His album and CD is a compilation of songs from his previous three albums and one extended play record, which Mr Escombe chose.

One of the songs on the album, Devils on the Loose, was inspired by a photograph taken of five firefighters who were taking a break after 36 hours from fighting the Yarloop fire in 2016.

The fire burnt for 17 days and claimed the lives of two locals.

Mr Bozanich said one of his favourite songs on the album was Friends, which is about how much value friends can give to our lives, and how different friends serve different purposes in our lives.

I'm singing about these things to provoke some response in people. Some anger. Love. Some tears in their eyes. Something that hits them somewhere and effects their solar plexus. Which is why the album is called that.

Along with Mr Bozanich's talent he had a lot of help to get to where he is today.

It all began three years ago when Mr Escombe was driving along a highway on his way to perform at the Bridgetown Blues Festival and stopped to pick up hitchhiker Mr Bozanich.

"I saw a sort of leather-clad figure walking along the side of the road and I thought he's obviously going into Bridgetown, so why don't I stop and give him a lift?" Mr Escombe said.

"I hitchhike a lot. In the six-and-a-half years since I have been here (in Greenbushes) I've probably met 5000 people," Mr Bozanich said.

Before parting ways, hitchhiking passenger Mr Bozanich handed Mr Escombe his latest recorded CD after he asked if he could have it.

A few days later Mr Escombe returned to Sydney and listened to the CD for the first time and was instantly gripped.

After about six months, particularly the first track on the album, Devils on the Loose, had become my number-one downloaded track.

A few days later Mr Escombe put up the music on his website with Mr Bozanich's permission under his stage name Grindhowl Screech.

"After about six months, particularly the first track on the album, Devils on the Loose, had become my number-one downloaded track," Mr Escombe said.

"It wasn't blues exactly, but it had that rawness and that emotion in the singing." 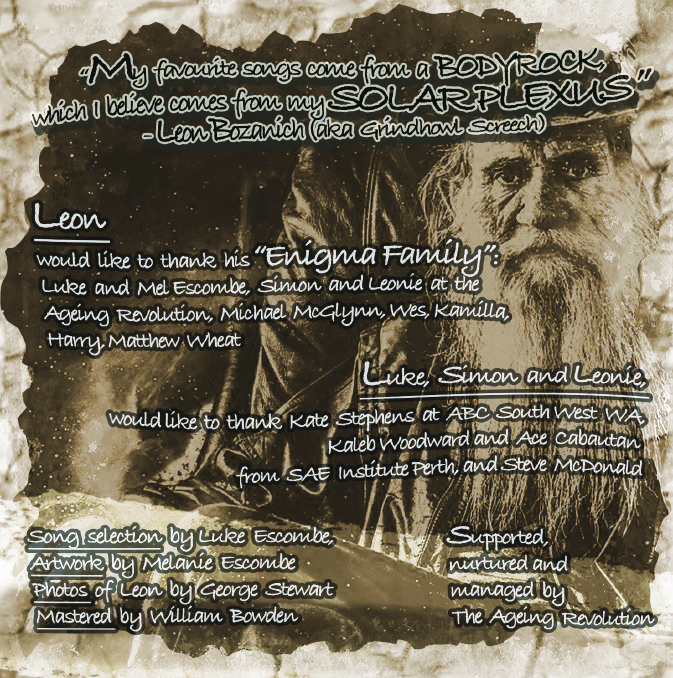 Leon Bozanich said he was is grateful to everyone in his enigma family. The CD artwork is designed by Melanie Escombe. Photo: Supplied.

Mr Bozanich sent him a new album every year since and their friendship grew.

"We are sort of pen pals. We will send each other texts," Mr Escombe said.

But Mr Escombe knew time wasn't in their favour when Mr Bozanich was diagnosed with cirrhosis of the liver late last year.

Then Mr Bozanich's recorder failed during a power outage.

"It just wiped the whole album and I had no recollection of the songs at all. It was possibly one of the best albums I'd ever written," Mr Bozanich said.

Luke contacted his friend Simon Lowe from The Ageing Revolution, an organisation that aims to change the perceptions of ageing.

Together they helped fund enough money for a new recorder and shipped it out to Mr Bozanich so he could continue recording his album.

It just wiped the whole album and I had no recollection of the songs at all. It was possibly one of the best albums I'd ever written.

Mr Bozanich said he was very grateful to Mr Lowe, Mr Escombe and everyone else in his enigma family.

"I call them my enigma family because all these people do all this beautiful work for me and work with me and most of them I've never even met because they live all over the world," he said.

"I'm blown away with all the help I have received to put this album together. The artwork for the album is beautiful. Mel did such a great job.

"It's the first time in my life where I can't really describe how I feel."

If you can't make it on the night to see Grindhowl Screech perform you can download the album and purchase his CD to his latest album here.

This story Music buried deep in his soul first appeared on Donnybrook-Bridgetown Mail.