This is the anti-vegan cookbook for vegans. Almost every vegetarian and vegan cookbook focuses on the whole wheat/kefir/green cleanse/salt lamp/lentil aspect of living a cruelty-free diet.

But what about those of us who actually dream of a greasy burger all day and all night, but simply can't justify eating animal products?

Or those of us who just wanted to opt out of the environmentally unsustainable meat industry?

Or anyone who is just keen to broaden their culinary horizons and dip a toe in the waters of veganism? Like author Zacchary Bird.

If you see and taste the world the same way as Zac, then this is the cookbook for you. 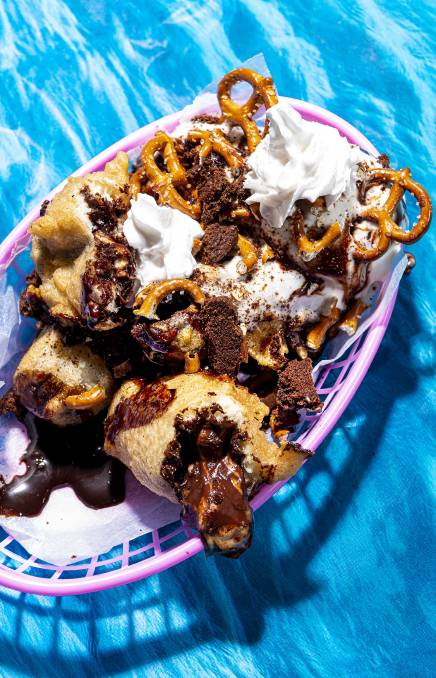 There's something about a beer-battered, deep-fried block of chocolate for dessert that can't be topped. But go for it and top it with ice cream as well. This is one of the few recipes that I occasionally look at and think, well, that's a bit much. Eat while sitting down with your next of kin notified as the calorie coma can set in almost immediately.

4 vegan chocolate bars (about 50g each)

1. Place the chocolate bars in the freezer for 2-3 hours to firm up.

2. Heat the canola oil in a large heavy-based saucepan over medium-high heat. Test if the oil is ready by inserting a wooden skewer or the handle of a wooden spoon into the oil; if it begins to bubble quickly then you're ready to go.

3. Place the flour in a small bowl and season with salt and pepper. Toss the frozen chocolate bars in the flour to lightly coat, then remove and set aside on a plate.

4. Pour the beer into the flour, stirring constantly, to create a batter. You may not need it all, so go slowly until the batter is runny but not so runny that it won't cling to the chocolate. Dip each chocolate bar into the batter until completely coated. One at a time, scoop the bars out with as much batter as you can keep clinging to them, then bravely drop the battered bars into the oil. Cook for two to three minutes, until golden brown and crisp.

5. Remove the chocolate bars using a slotted spoon and drain on a paper towel. Serve warm with a sprinkling of fat sea salt flakes, chocolate sauce, chocolate cookies, soy or rice whip and a few pretzels, or whatever sweet garnishes you have lying around.

Note: For a gluten-free version of this dessert, use soda water (club soda) instead of beer and replace the flour with gluten-free flour. Hidden veggies are a dead trend, joining other failed food fads, such as salads suspended in jell-o, in the hall of shame. It's time to proudly display your love of vegetables, with lumps of pumpkin stirred through this mac 'n' cheese instead of being snuck into the cheese sauce.

1. Preheat the oven to 200C. Line a baking tray with baking paper.

2. Place the pumpkin on the prepared tray and bake for 20 minutes or until soft and cooked through. Transfer the pumpkin to a bowl and lazily mash it with a fork to create a lumpy mash.

4. Cook the macaroni according to the packet instructions until just before al dente. Drain and set aside in a medium baking dish.

5. Heat the olive oil in a saucepan over medium heat. Sift in the flour and stir constantly for two minutes until you have a roux. Once the roux starts to bubble, gradually whisk in the soy milk a little at a time. When all the milk has been incorporated, stir in three-quarters of the cheese, the garlic powder, mustard and nutritional yeast and cook, stirring, for eight to 10 minutes, until thickened. Remove from the heat and stir through the nutmeg, thyme, chilli and sage.

6. Pour the cheese sauce over the cooked pasta, add the mashed pumpkin and gently mix to combine. Season with salt and pepper, then scatter the remaining cheese and the breadcrumbs over the top.

7. Transfer to the oven and bake for 30 minutes or until the breadcrumbs are crisp and golden. Allow the mac 'n' cheese to cool for 10 minutes before serving. 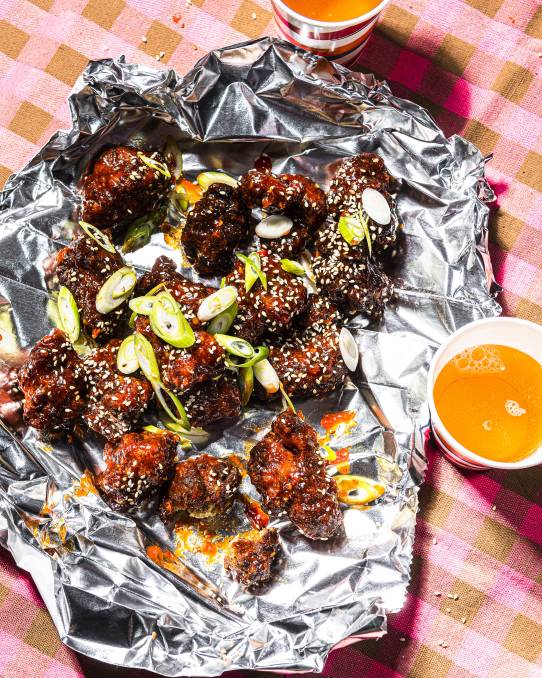 This recipe might be a little time intensive to make from scratch, but one could argue that it takes a lot less time than raising a chicken. Opting for store-bought seitan or faux chicken and rice malt syrup brings the preparation for this recipe down to less than 30 minutes.

95g gochujang, plus extra to taste

1. Combine the seitan chunks, ginger and soy sauce in a large bowl until the ginger is distributed evenly and the seitan has absorbed the soy sauce.

2. In a separate bowl, combine the coating ingredients. Add the seitan, toss to coat and set aside for 10 minutes.

3. Meanwhile, heat the canola oil in a large saucepan or deep-fryer to 180C using a kitchen thermometer to assist you.

4. Toss the seitan pieces again in any remaining coating mixture to achieve a dry exterior. Place immediately into the hot oil and fry for three to four minutes to cook through. If the seitan pieces are browning too quickly, remove from the pan and allow to cool before flash-frying again until crisp. Transfer to a plate lined with a paper towel to drain and sprinkle with salt.

5. While the seitan is frying, make the sauce. Fry the garlic in a small saucepan with one teaspoon of the hot frying oil over medium heat for two minutes. Add the remaining sauce ingredients and simmer, stirring occasionally, until the sauce starts to follow the spoon about, adding a splash of water if you want to make it runnier. This should be ready by the time you take the seitan out of the oil. Taste and add an extra squeeze of gochujang if your friends can handle it.

6. Put the finishing touches on your masterpiece by using a pastry brush to paint the sauce onto the surface of the fried seitan, brushing as much flavour as you can into the crevices. Or, less artfully, dump the seitan into a bowl and pour the sauce over the top, tossing until fully coated. 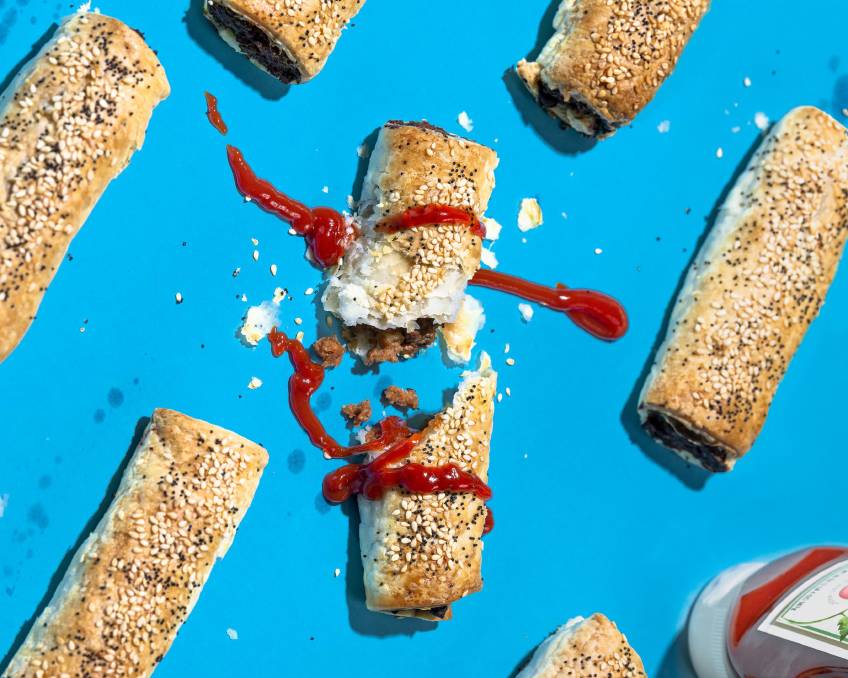 My sausage rolls are a consistent crowd pleaser, with mushrooms and herbs serving to bulk out your choice of "meat" and give off gourmet vibes. The wash of milk and oil somehow makes them simultaneously crispy and soft, and ensures they're just as good days later if your rolls survive long enough to become cold and old.

2. Heat one tablespoon olive oil in a frying pan over medium heat. Add the onion and cook, stirring occasionally, for five minutes. Add the garlic and mushroom and continue to cook until the mushroom has broken down and any liquid has evaporated. Transfer the mushroom mixture to a food processor, along with the stock cubes, soy sauce, Worcestershire sauce, thyme or rosemary leaves and the liquid smoke (if using) and blitz to combine.

3. Place the mince in a large bowl and use a fork to mash the mustard, pepper and parsley into the mince. Stir in the mushroom mixture until well combined. Divide the mixture into quarters.

4. Cut the pastry sheets in half and place them in front of you. Evenly spoon the mince mixture along the long edge of each pastry sheet, then fold the pastry sheets over to enclose the filling and use a fork to crimp and seal the edges. Press the sausage rolls down on this crease to seal shut, then cut in half and stuff any filling that's fallen out back into the open ends.

5. Whisk four teaspoons olive oil and the soy milk in a small bowl. Using a pastry brush, brush the mixture over the top of each sausage roll and sprinkle with the sesame seeds and/or poppy seeds (if using). Bake for 25-35 minutes, until golden.

6. Serve with tomato ketchup or your favourite tomato sauce.

7. The sausage rolls will keep in an airtight container in the fridge for three to four days or in the freezer for up to three months. 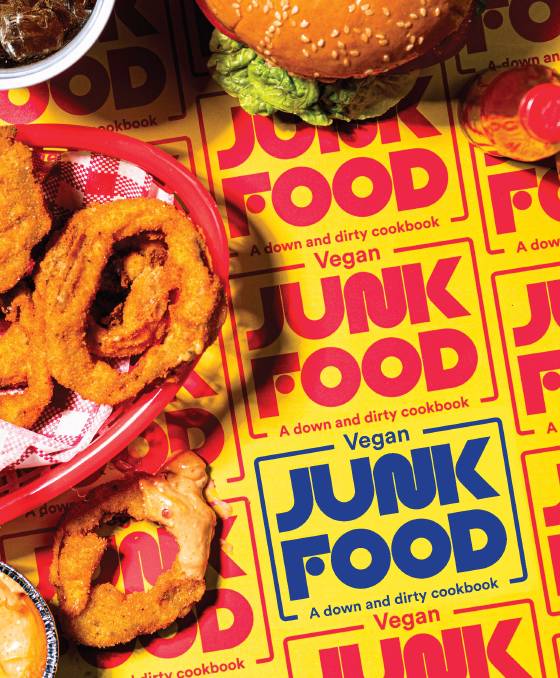 This story Do vegans dream of greasy junk food? If you do, check out this cookbook first appeared on The Canberra Times.

Discuss "Do vegans dream of greasy junk food? If you do, check out this cookbook"

Please note: All comments made or shown here are bound by the Online Discussion Terms & Conditions.

Discuss "Do vegans dream of greasy junk food? If you do, check out this cookbook"

Please note: All comments made or shown here are bound by the Online Discussion Terms & Conditions.