It's not every day you walk a labyrinth that's been hand-crafted by an acclaimed dowser.

Regular readers will be all too familiar with this column's long-running fascination with labyrinths, and here, squirreled away in the bush near Braidwood is arguably one of our region's best.

More about the labyrinth later, but what about the dowser? If you're thinking dowsing is the process whereby someone wanders around with a couple of pieces of wire waiting for them to miraculously cross-over to indicate the presence of groundwater, then you'd be right. Some people call it water divining. And yes, Dick Smith and his gang of serial party-poopers (perhaps rightly so) from the Australian Skeptics have long offered a $100,000 reward for anyone who can prove they really can find water with divining rods. No one has claimed the prize. Yet. That's probably because mainstream science says it's all a load of baloney.

But try telling that to dowser Robert Gourlay, who, along with producing a range of alternative health products from his property in the Mongarlowe Valley, about 20km north-east of Braidwood, also operates a successful dowsing service.

"The farmers don't question me, it's only the Dick Smiths of the world, the sceptics, because their minds are not open to dowsing," says Robert, who was recently named Dowser of the Year by The Dowsers Society of NSW. 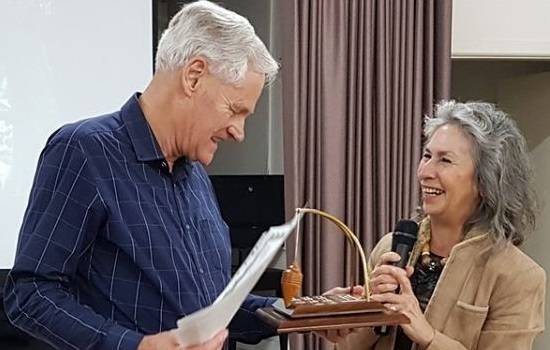 Robert is presented with his gong as Dowser of the Year. Picture: Supplied

"Science is about discovery and explanation and when you put a boundary around science and say this is in the box and this isn't, then you've lost it," claims Robert, who is quick to point out his own scientific qualifications which include a Master of Applied Science.

"Dowsing is an ancient art and you can find evidence of it going back 8000 years where different implements were used for dowsing," he says. "It's embedded in all cultures. Even today, the rods held by Bishops can be traced back to divining rods."

Robert was first exposed to the art of dowsing when he "watched a guy divine a bore" on his property back in the 1980s.

"Amazed" at the success of the dowser, Robert then "read every book" he could find on the subject and soon started to try it for himself. Since 1995 when he "really started to get very serious about dowsing", Robert reckons he has located "about 5000 sites for bores on 1000 properties".

So are Robert's tools of the trade spare coat hangers plucked from the back of his wardrobe? Not quite, Robert's divining rods are made of copper and brass which he "cleanses" every month or so under running water "to ensure they keep their power".

And what's more, Robert puts his success down to not only his dowsing prowess, but also a unique mapping technique which he pioneered in 1992 that can help pinpoint deep, fractured rock groundwater sources. 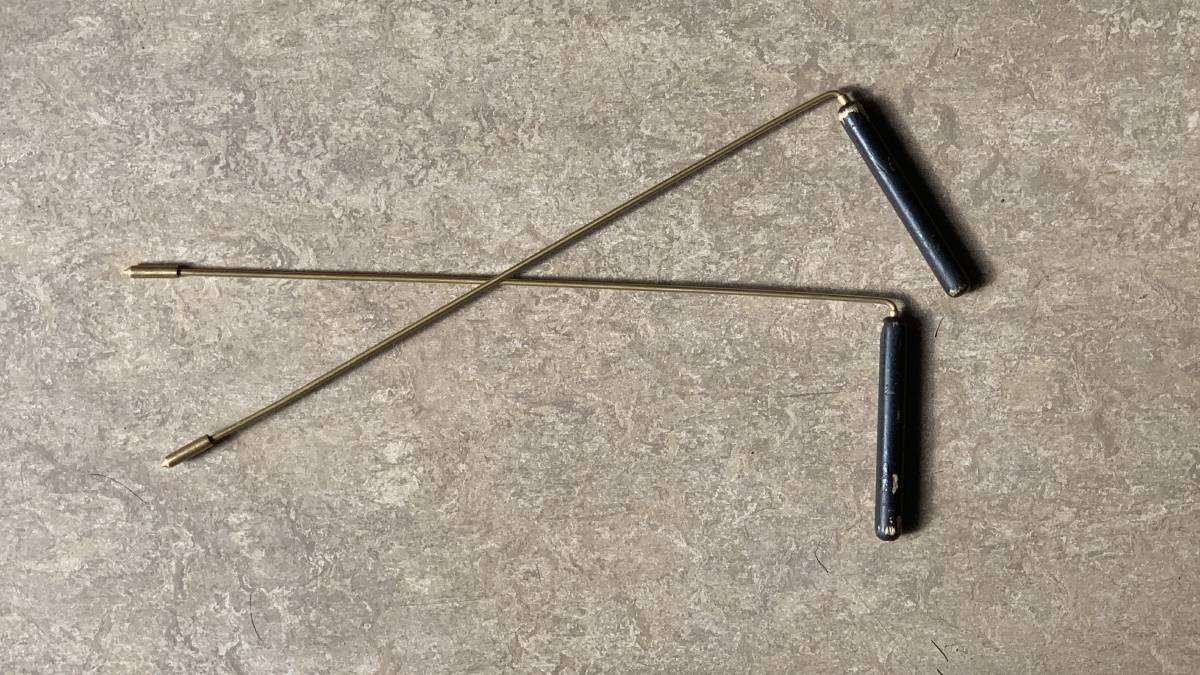 "The mapping tells me where to go, I then pull out the rods to find the fractures and the depth of the volumes," he explains.

So is it hard to divine? Can anyone do it?

Well, when Robert gives me a quick demonstration in his paddock, it works for him. Of course it does. He's the master. And yes, in this case he already happens to know exactly where the water is on his property.

However, when I attempt to find the same underground water, the rods don't budge - it's like they are superglued to my hands.

Robert assures me, it's my technique, or lack thereof. "You need to be more in tune with what you're doing," he says, adding "you can't just become a successful dowser overnight". Fair enough.

So what's the connection to the labyrinth? Well, like just about everything at Robert's bush hideaway, its location - "perfectly positioned at the centre of two energy lines" - is inherently linked to dowsing.

"The underground water creates energy that pull these limbs down," explains Robert as he leads me past two trees with branches almost scraping the ground near the entrance of the labyrinth.

"Walking the labyrinth is just like a walking meditation, it's a life path," says Robert as he leads me along the classic eight-path labyrinth he lovingly created from thousands of small stones plucked from surrounding paddocks.

However, this ancient stone pathway replica isn't the only treat Robert has in store for me at his bush hideaway. From the centre (goal) of the labyrinth he points towards his rare Mongarlowe Mallee (Eucalyptus recurva). Also known as an 'Ice Age Gum', only a handful of these smooth-barked mallees, which don't grow more than 3m in height, are known in the wild, all near Braidwood. In fact, about 20 years ago, to ensure secrecy over its location, I was blindfolded and driven to one of the only known trees at that time, and while I can't tell you where that tree is, I can tell you where Robert's specimen is. It's growing on an earthen mound between a chunk of rock engraved with the periodic table (really!) and a laboratory where he is churning out vats of Phi'on branded health products, including human probiotics which he sells via mail order to customers all over the country.

No matter your take on the pseudoscience behind dowsing, you have to hand it to Robert for his passion in following his dreams.

Now I've just got to find my way out of this labyrinth. 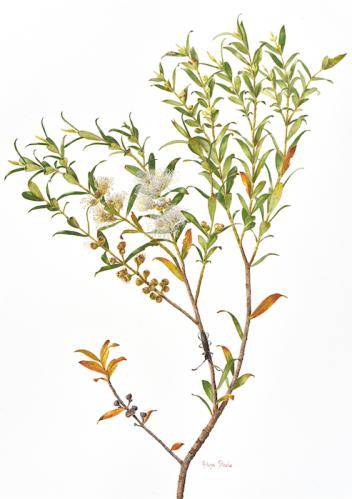 Exquisite painting of the Mongarlowe Mallee - one of the rarest plants on the planet. Picture: Halina Steele

Did You Know? In 2017, Canberra botanical artist, Halina Steele won the gold medal at the Royal Horticulture Society in London for her painting of the Mongarlowe Mallee growing on Robert's property.

DOES THIS FLOAT YOUR BOAT? 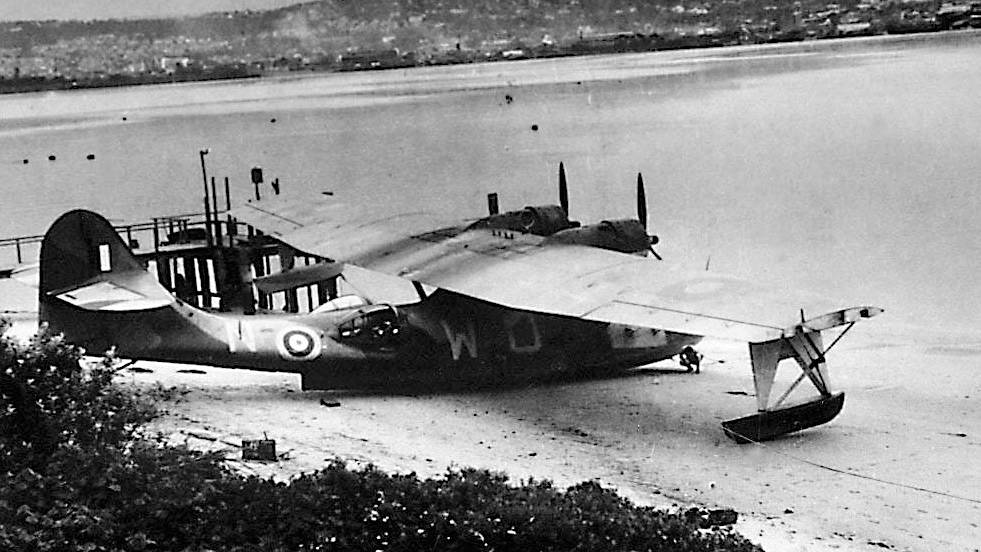 Denis Saunders of Weetangera has rightly taken exception to this column's recent reference to a Sunderland flown by his late father as a float plane.

"It is actually a flying boat, not a float plane," he asserts.

"Float planes are land-based aircraft with a set of floats to allow them to land on water," he explains, adding "true flying boats have boat-shaped hulls and floats near the wing-tips to keep them level in the water - they are literally flying boats. Take the floats off a float plane and you can't land it on water."

And Denis should know, for his late father, Flight Lieutenant Eric Saunders, operated flying boats during World War II and afterwards until the RAAF disposed of their flying boats in the early 1950s.

"Dad once told me he joined the airforce 'to get out of the insurance business and Melbourne and to see the world'. He succeeded in both."

But Eric was one of the lucky ones. "Only half of the 50 young men who graduated with dad from Elementary Flying Training School at Narrandera in December 1940 survived World War II, an attrition rate higher than soldiers in World War I," he laments.

It seems your akubra-clad columnist isn't the only grumpy old (middle-aged?) man to insist that hot chocolate must be made with milk and not hot water. "We recently spent $40 on five hot chocolates at a Snowy Mountains café only to discover they weren't the real deal," bemoans Kirrily Johnson of Kambah, adding "they were made [with] water, a few spoons of cocoa and just a dash of milk." What a rip off. Mmm, Perhaps it's time to name and shame.

Meanwhile, several readers suggest no hot choccie (for adults) is complete without a nip of your favourite alcohol. "Hot chocolate and peppermint schnapps is a top combination for telling tales around the campfire," reveals Andrew Claridge. I agree, but so long as it's made with milk and not diluted with hot water. OK, I'll stop now.

Clue: Where the snow gums grow The hedge at St John's church in Reid. Picture: Tim the Yowie Man

Last week: Congratulations to Penleigh Boyd of Reid who was first to correctly identify last week's photo as "the delightful little laneway at St John's church in Reid, which forms the north-east boundary of the church graveyard, running parallel to Amaroo Street (at its Anzac Park West end)." Penleigh, who just beat Sheila Thompson and Charles Body to the prize, reveals "the laneway is also in alignment with the old 1920s construction railway line to Civic".

Several readers, including John Standen of Kaleen commented on the irregular shape of the otherwise manicured hedge and wondered if it could in fact be the 'lumpiest' hedge in Canberra. Well, according to Helena who runs the 'Hedges of Canberra' Instagram page (really!), it's nothing compared a hedge in Stokes Street, Manuka. 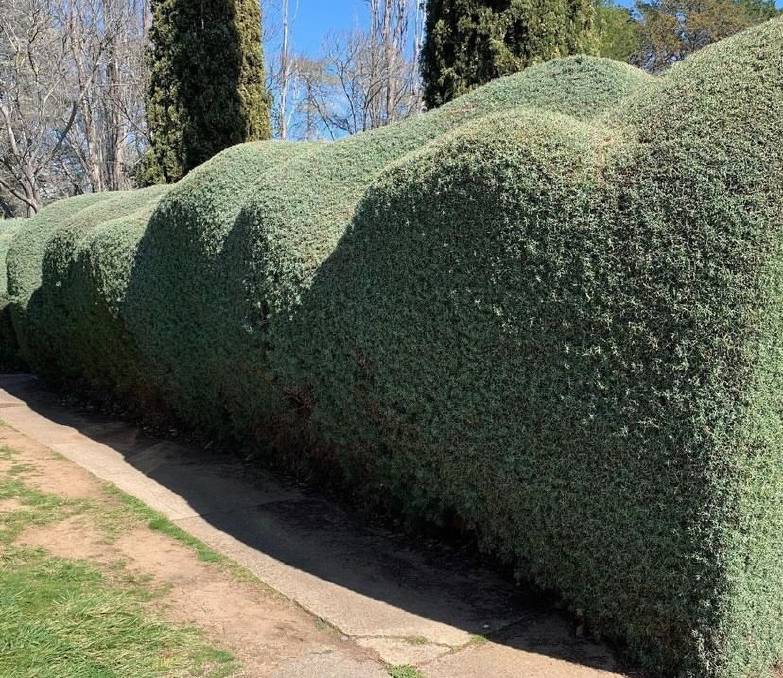 Wow, look at it. According to Helena, "it's the artistic intent that makes it so lumpy, adding "those who tend to this hedge allow it to sculpt its own vision and form its own beauty".

How to enter: Email your guess along with your name and suburb to tym@iinet.net.au The first email sent after 10am, Saturday 24 July, 2021, wins a double pass to Dendy, the Home of Quality Cinema. Can you see the smiling face? Picture: Glen Charnock

Last week's snow flurries caused much excitement with the white stuff falling in many Canberra suburbs. While it didn't settle on the ground in the city, further south in Namadgi National Park and just across the border at Gail Neuss' property at Shannons Flat, it transformed the rocky landscape into a winter wonderland. "It looks like someone is happy to see it snow," muses Gail, referring to the temporary grin that appeared on this granite boulder.